The global hedge fund industry has witnessed two distinct phases during the first half of 2012: two months of strong performance and positive asset flows, followed by four months of negative performances and net outflows. Currently the size of the industry stands at US$1.75 trillion, managed by over 10,000 funds.

In the last 12 years the industry saw tremendous growth with assets under management (AUM) increasing by more than five times while the fund population has grown by 3.5 times. The industry posted its strongest gains, both in terms of performance and asset flows, from 2003 to 2008, reaching its zenith in June 2008 with assets of nearly US$2 trillion. This growth trend was reversed in 2008 by the financial crisis causing assets to fall to US$1.29 trillion by April 2009 due to performance-based declines (the Eurekahedge Hedge Fund Index was down 10.28% in 2008) and heavy redemptions by investors. Strong rallies in global markets in the last eight months of 2009 and subsequent positive asset flows aided the industry’s recovery but concerns about the global economy and the European debt crisis has stalled this recovery. 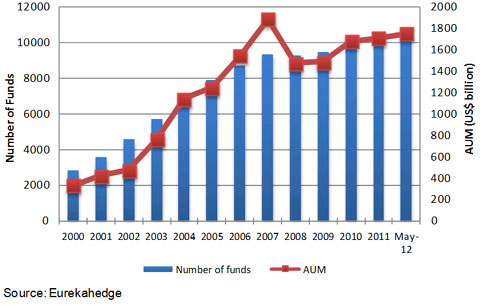 Although hedge funds ended 2011 on a sombre note, they posted excellent gains in the first two months of 2012 while also attracting capital. The increased risk aversion in the markets has resulted in muted performance since March while the industry has also witnessed some net outflows.