Hedge fund performance was flat to slightly negative in June as global markets witnessed several trend reversals during the month. The Eurekahedge Hedge Fund Index registered a marginal loss of 0.14%1 during the month, bringing its June year-to-date figure to 1.38%. In comparison the MSCI World Index was up 3.65%2 .

June proved to be a tough month for hedge fund managers with frequent trend reversals and shifts in risk sentiment making it a difficult environment to operate in. The first half of the month witnessed positive movements in the markets amid expectations of stimulus by the US Federal Reserve and the election of pro-bailout parties in Greece. The second half of the month witnessed an increase in risk aversion amid concerns about Spanish banks but positive developments at the European Union leaders' summit between June 28th and 29th led to a month-end rally. 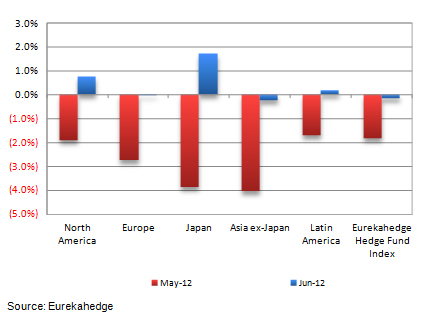 Most regions delivered flat to slightly positive returns with only Asia ex-Japan hedge funds finishing in the red. The Eurekahedge Asia ex-Japan Hedge Fund Index was down 0.23% for June with managers losing out due to ...