The global hedge fund industry delivered another month of outperformance in April, ending in positive territory as most global markets registered declines for the month. The composite Eurekahedge Hedge Fund Index, which tracks the performance of nearly 2,500 hedge funds across the world, advanced by 1.24%1 in April, bringing its 2010 year-to-date returns to a healthy 3.33%. Global markets, represented by the MSCI World Index, declined by 0.16% in April, with the April year-to-date figure of the index standing at  2.58%.

The chart below shows hedge fund returns for February and March 2010 across different geographical mandates: 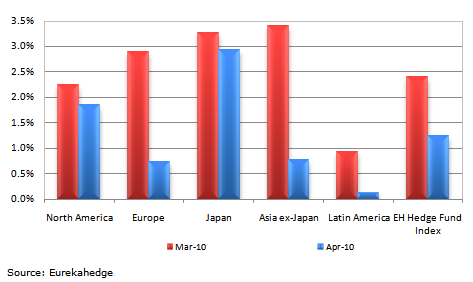 Hedge funds across all regional mandates produced robust returns in April, making it the second consecutive month of across-the-board positive returns. Japan-investing managers exhibited the best performance, with the Eurekahedge Japan Hedge Fund Index gaining a strong 2.93% in the month. Japanese managers benefited from long positions in the small- and mid-cap market while decreasing the weight to defensive large-cap stocks. North American managers were also in the green, with the average hedge fund gaining 1.84% in April and outperforming the underlying markets – the S&P 500 rose 1.58% during the month.

While Latin American hedge funds were mostly marginally up for April, the results were significant in offering downside protection by managers as the Bovespa declined by 4% in the month. European funds also remained healthy, navigating the volatility through...