Hedge funds were down in May amid sharp movements in global markets and a spike in risk aversion. The Eurekahedge Hedge Fund Index was down by 2.33% during the month as managers struggled with the volatility and unpredictable shifts in the markets, making it the worst month for the industry since October 2008. However, the sector’s year-to-date performance remains in the black, with the Eurekahedge Hedge Fund Index up 0.78% May year-to-date. In comparison, the MSCI World Index was down 9.91% in May, standing at -7.64 for the year so far.

After delivering across-the-board positive returns for March and April, hedge funds across all regions ended May in negative territory. However, managers of all regional mandates beat their respective underlying market indices with significant outperformance. In absolute terms, Latin American and North American managers were the best performers for the month (in the sense of losing the least), down 0.77% and 2.12%, respectively, while the Bovespa was down 6.64% and S&P 500 lost 8.2%. In relative terms, European hedge funds delivered the most outperformance, down 2.78% on average and beating the MSCI Europe Index by more than 10%.

The chart below shows hedge fund returns for April and May 2010 across different geographical mandates. 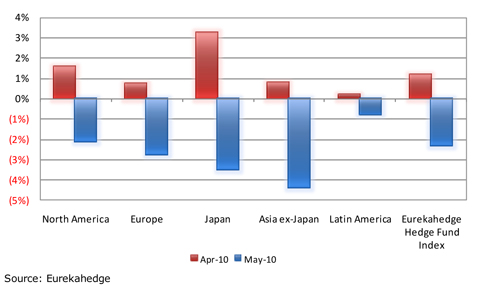 In the year-to-date measure, as shown in the next chart, Japan-investing hedge funds maintain their lead position despite losing 3.51% in May. The Eurekahedge Japan Hedge Fund Index is up 3.71% May year-to-date after posting some strong gains in March and April.

Similarly, North American hedge funds were up significantly in the first four months, and as such, despite the losses in May, the sector remains healthy in the year-to-date measure. The Eurekahedge North American Hedge Fund Index is up 2.12% May year-to-date. Leading up to May, managers had been helped by…