The global hedge fund sector ended 2009 with a healthy performance in December. The composite Eurekahedge Global Hedge Fund Index, which tracks the performance of all hedge funds on an equally-weighted basis, gained 1.07% in the month, bringing the 2009 figure to 19.37%1 – the highest yearly gains on record since the bumper year of 2003.

Managers of all regional mandates ended the month in positive territory, posting healthy gains on the back of positive economic data across the regions which led to renewed risk appetite. Asia ex-Japan managers delivered the highest returns among regional mandates – the Eurekahedge Asia ex-Japan Hedge Fund Index increased by 2.02%, slightly higher than the Eurekahedge North American Hedge Fund Index which gained 1.92%. Japanese hedge funds also delivered a strong performance of 1.86%, ending a three-month period of negative returns as the Nikkei gained 12.8% through the month amid news of the market’s return to growth.

The chart below compares the hedge fund returns for November and December 2009 across the different geographical mandates. 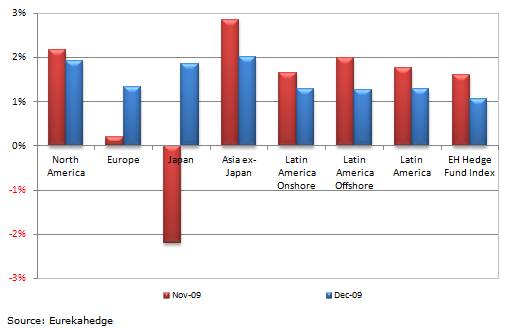 Hedge funds for all regional mandates also finished 2009 with positive performances, with some regions witnessing record returns. Most prominent were Asia ex-Japan managers who were up by 37.98%, posting the best annual performance on record across all regional indices in ten years. North American and European managers also…