The Eurekahedge North American Hedge Fund Index, which measures the performance of hedge funds allocating to North American markets, witnessed its best performance on record in 2009, posting gains of 23.45%1 through the year as strong rallies in the underlying markets across different asset classes worked in favour of the industry. This is a significant outperformance over the global average (19.29%) as well as the European hedge funds, which gained 21.69% during the same time period. When compared to the underlying markets, North American hedge funds show a remarkable trend – in the three years since December 2006, the Eurekahedge North American Hedge Fund Index is up 21% while the S&P 500 is down more than 21%.

After suffering massive redemptions through August 2008 to April 2009, the region’s hedge fund industry started attracting capital again in May 2009. In the last eight months of the year, North American hedge funds gained US$43 billion in positive net asset flows, ending 2009 with assets under management standing at US$965 billion, up 14% from April 2009. The region accounts for the 64% of the global hedge funds industry, down a marginal amount from about 67% in 2008.

Figure 1 shows the growth in the number of hedge funds and the assets under management in North American funds since 2000. 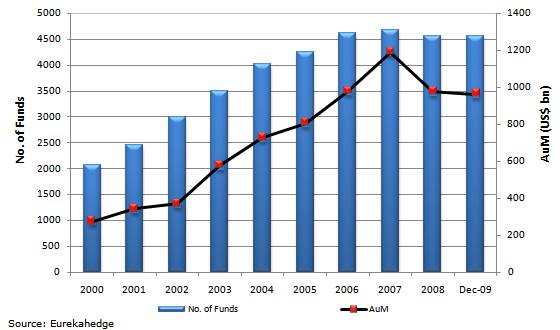 2009 was a year of mixed fortunes for the region’s hedge fund industry. The sector saw 14% of assets withdrawn in the first four months of the year, with the total AuM figure dropping below US$850 billion in April. Since then, however, we have seen an impressive rally and currently, AuMs of North American hedge funds stand at...