Amid the uncertainty plaguing global markets and the broader financial industry, North American hedge funds have stood out as one of the few sectors that have witnessed growth and the industry maintains a healthy outlook for the future. Even among the global hedge fund industry North American managers have emerged stronger from the financial crisis of 2008 to 2009 with the number of funds at an all-time high and assets under management (AUM) touching historically high levels.

North American hedge funds witnessed tremendous growth from the start of 2000 until mid-2008, with the number of funds increasing 2.5 times and AUM growing five-fold from US$250 billion to US$1.25 trillion. The losses and heavy redemptions by investors during the financial crisis resulted in AUM declining to below US$850 billion by April 2009. 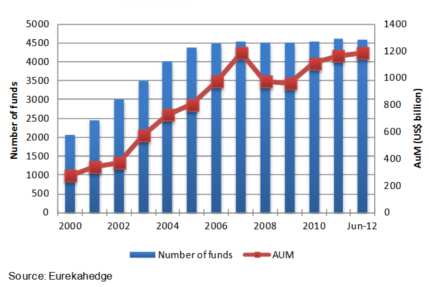 Since then the industry has witnessed a remarkable rebound with the fund population and AUM almost at historically high levels. Currently there are estimated to be 4600 managers making up the North American hedge fund industry; including those based outside the continent but investing in the regional markets, while total AUM has remained close to US$1.2 trillion.

These numbers are set to grow even further over the next few years as new regulations come into effect, resulting in large banking groups spinning off their proprietary trading arms.