The rapid development of the Islamic fund industry over the last decade represents the progress and advances made in the Islamic finance sector. The primary goal of Islamic funds is to engage in 'ethical investing' into products and companies that are acceptable to the Islamic faith. As such, Islamic funds are wealth management vehicles that cater to investors who want exposure to capital markets inside a Shariah framework, which is the key distinguishing factor from other conventional funds.1 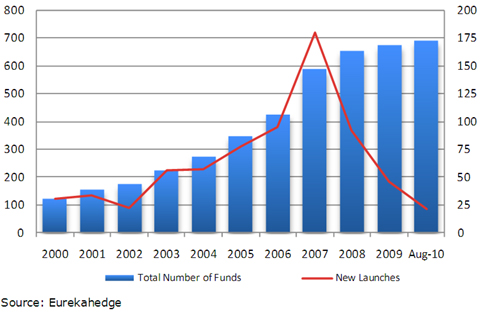 The Islamic fund sector experienced sustained growth in 2007, which saw the launch of 180 funds. However, subsequent years have seen a decline in launch activity though it should be noted that despite a slow growth rate, the number of funds did not decrease as Islamic funds mostly invest in asset-backed securities and do not apply leverage,  hence, limiting performance-based losses. Additionally, existing funds have further consolidated their positions in 2009 and 2010 – the Eurekahedge Islamic Funds Index was up 32.17% since February 2009.

1 For a more detailed description of what constitutes Islamic investing, please refer to the Eurekahedge Key Trends in Islamic Funds report published in January 2010. www.eurekahedge.com/News/371/Overview_of_2009_Key_Trends_in_Islamic_Funds
[Top]