Global fund of hedge funds have witnessed a dramatic change of fortunes over the last two and a half years. The industry grew at a steady pace between 2003 and early 2008, with assets under management peaking at US$826 billion, before suffering considerable losses and widespread redemptions1amid the global financial crises. After losing US$393 billion between March 2008 and July 2009 – a drawdown of nearly 48% – industry assets seem to have stabilised around the US$450 billion mark. Performance has also been healthy in 2009 and 2010 – the Eurekahedge Fund of Hedge Funds Index was up 9.39% in 2009 and 1.54% in year-to-date September 2010.

The figures below show the growth in the fund of funds industry over the years.

Figure 1a: Industry Growth over the Years 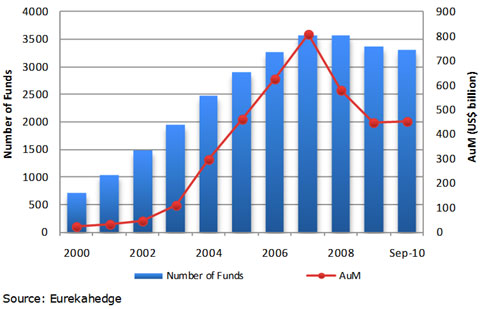 After witnessing massive outflows in 2008, which were exacerbated by poor performance and some high-profile frauds, total AuM in the funds of hedge funds industry fell to US$433.7 billion by July 2009. However, the trend of redemptions slowed down as the global economy recovered from the downturn and multi-managers started to post some positive results. Nevertheless, subscriptions remained weak through most of 2009 because of scepticism among the investors who had previously suffered due to losses or lock-ups.

While the first half of 2010 witnessed a continuation of flat to negative net flows, the third quarter saw net assets increase through...