Hedge funds were up for the fifth consecutive month as managers outperformed the underlying markets in November. The composite Eurekahedge Hedge Fund Index returned 0.40%1 in the month, bringing its year-to-date return to a healthy 7.72%. In contrast, the MSCI World Index2 fell 2.35% during a month of high volatility and sudden trend reversals, with its YTD November figure falling to 2.15%

Returns across most regional hedge fund mandates were muted, with the exception of Japanese managers who reported gains of 2.57%. Positive movements in the Japanese markets provided managers with ample opportunities to lock in substantial gains. The Nikkei 225 rose above 10,000 points for the first time since June, finishing the month with impressive gains of 7.98%, while the Topix ended the month 6.17% higher. Monetary easing announcements from the US Federal Reserve provided early momentum to the Japanese markets, which was sustained by a depreciating yen. However, the Korean situation and renewed concerns over the European sovereign debt issues dampened the rally near month's-end.

All other major regional hedge fund mandates delivered positive, albeit marginal returns. The Eurekahedge North American Hedge Fund Index was prominent in its outperformance to the underlying markets, delivering 0.75% in November and beating the S&P 500 by 0.98%. European hedge funds provided the best downturn protection during the month, up 0.39% compared with a 7.81% drop in the MSCI Europe Index3. Most of the regional markets finished the month in negative territory due to renewed fears of the European sovereign debt contagion. Hedge funds focused on emerging Asia and Latin America also delivered significant downside protection – the Eurekahedge Asia ex-Japan Hedge Fund Index was up 0.46% in November while the Eurekahedge Latin American Hedge Fund Index posted returns of 0.25%. 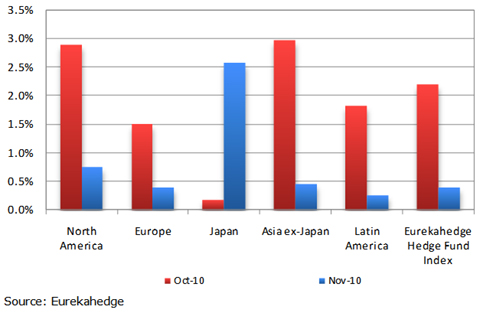