Islamic financial instruments are yet to stabilise in the markets and have inherent risks in their current structures. Nidhi Bothra discusses.

The basic proponents of Islam, which include socio-economic justice, equitable distribution of wealth and so on, have trickled down to the financial system as well to ensure religiously legitimate financial operations, giving the world a whole new distinctive and fast-growing segment in the international banking and capital markets.

Islam not only regulates conduct of life but also governs conduct in business and trade. As it is well established that strict rules apply to finance under Islamic law, the conduct for business and trade was set which includes; a) Riba which is prohibited in all transactions; b) business which is to be undertaken on the basis of permitted activities or Halal; c) gambling (Maysir) and speculation (Gharar) are prohibited and; d) all activities are supervised by the Shariah board, advising on the propriety of transactions.

Riba is shunned as per the Holy Quran but Riba or the interest rate mechanism was to be substituted by something that has led to resource allocation in the financial system. Hence the profit-loss sharing model came into existence. 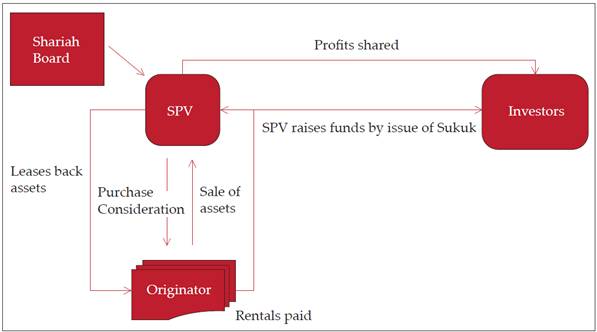 Why have Islamic structures gained popularity?

The innovations engineered in the Islamic financial transactions have opened doors to a wide range of different Islamic products. It has not only led to the development of the financial markets in Muslim population-denominated countries, but also allowed global investors an alternative range of instruments to invest in. On the other side, it has also allowed countries willing to undertake Shariah compliant financial transactions to tap such investors who could not invest in conventional financial instruments, leading to a two-way benefit.

While in the early 1990s, when Sukuk first emerged, a lack of understanding of the intricacies of the rules demanded by Shariah was the stumbling block to the growth of Islamic finance. Financial crisis gave the financial markets reasons to explore this industry giving the industry impetus for growth. The growing capital flows and liquidity through Islamic markets coupled with innovation poised the growth of the Islamic finance industry, but on the flip side, the blooming industry poses a new set of risks as well.

A lot of conventional securitisation transactions are backed by the underlying pool of receivables coming from credit cards, mortgages and so on. These loans, being interest bearing loans do not comply with the Shariah structure. For any Islamic securitisation transaction to comply with Shariah requirements, the financing backing of the sukuk should have some ownership component and the investors should have the ability to exercise the same, if need be or there should be some right to use, that may be transferred to the investors vide those underlying assets. In essence, investors should have direct exposure to the business risk and receive a share of profit which is commensurate to the business risk they have undertaken.

In Islamic securitisation, it is important to ensure that the investors invest in an institution which does not deal with interest or prohibited activities, and also the underlying assets on which the sukuk are issued should confer some ownership rights on the investors. This means that the relation between the obligor and originator and the issuer and investors should fall within the proponents of an Islamic financing scheme.

The most common structure used in Islamic securitisation is sukuk Ijarah. The transaction structure is illustrated below:

Such a transaction has to be approved by the Shariah board and each leg of the transaction must comply with the proponents of Islamic law.

The structure of securitisation under Islamic philosophy in its features does not differ greatly from that of a conventional type. The securities that are issued by the SPV are claims on assets held by the issuer SPV, such that claims are closely attached to the ownership of such assets. Sukuk does not guarantee a pre-determined rate of return but a variable one, alongside with the performance of the assets under securitisation and have the pass through feature as prevalent in conventional securitisation yet also satisfying Islamic principles.

The Islamic financial instruments are yet to stabilise in the markets and have inherent risks in the current structures which include the following:

Legal risks – The primary concern while structuring any Islamic securitisation transaction is that it needs to be Shariah approved. As the financial instruments need to be compliant with Islamic law and approved by the Shariah board and the decision of the board may vary from the group of Shariah scholars on the board. With Islamic law not being definitive, issues regarding uniform recognition and homogenous interpretation are a major concern. The legal restrictions and uncertainties lingering at manifold levels is not structuring friendly and acts as a deterrent for non-Islamic countries.

A uniform regulatory and legal framework supportive of an Islamic financial system has not yet been completely developed. Countries need to take the initiative by bringing in regulatory support for expansion of the Islamic finance industry alongside conventional financial services market. Though there are bodies working towards bringing about Shariah compliant standards such as the AAOIFI, the International Islamic Financial Market (IIFM) and the Islamic Financial Services Board (IFSB), there is a great need of aligning the legal framework for explicit and transparent functioning of Islamic finance.

Apart from these legality of Islamic financial instruments and acceptability as per Shariah laws is also a big challenge.

Structural risks – As mentioned earlier, in the case of Islamic securitisation the structure needs to be compliant with Islamic laws. First, the underlying assets should be such that they meet the Shariah requirements and second; there should be substitutes of some of the features of conventional securitisation such as credit enhancement, liquidity support, etc., such that the structure remains Shariah compliant. While the eligible asset criterion limits the kind of assets that can be securitised under Islamic laws, the latter requirement puts the transaction to structural risk of being characterised as a non-permissible transaction.

That means the rewarding system under Islamic philosophy is based upon risk taking considerations, and no room for gains without exposing to some sort of business risk.

Generically as well, the Muslim countries have been recently exposed to finance-based economies. Countries where civil law and religious laws are different may find it difficult to align the two to ensure that the financial services are Shariah compliant. Also several Shariah scholars have their own interpretation of the laws, which would mean that the Shariah compliance is more of a subjective issue than the laid down principles.

Regulators need to have an in-depth understanding of the Shariah principles to be able to supervise and monitor the financial markets. This surely is a constraint for non-Islamic countries. With the growing Islamic finance market, it would become critical to have Shariah scholars who would understand financial markets as well. A lot is left to interpretation and subjective opinions. Owing to the lack of standardisation, each transaction has to be assessed individually, increasing costs entailing the transaction.

On the name of innovation, the world is exposed to a whole new set of Arabic jargon, which adds to the complexity of the structures.

The form over substance issue is greater in these instruments as the legal system is much less resilient or lesser explored for testing such products unlike in case of conventional instruments. While there is a lot of stress being laid on Shariah compliance for developing financial instruments at times of distress, how these assets would perform and the legal recourse that would be available to investors remain yet to be tested, whereas on the other hand, the conventional markets are seasoned on these issues. The disparity between ideal and real sukuk has been highlighted as a major concern.

There is a need to strip away the legal and structural complexity of such instruments and in substance keep the risks and rewards associated with such instruments based on Islamic proponents to enable the industry to thrive in a true sense.

Nidhi Bothra is the vice-president of Vinod Kothari Consultants.