Hedge fund returns were negative during May as sudden trend reversals and an environment of increased volatility effected performance. The Eurekahedge Hedge Fund Index was down 1.24%1during the month, against the backdrop of a 4.75% increase in the VIX and a 2.52% decline in global equities, as measured by the MSCI AC World Index2. Although this was the first negative month for hedge funds since June 2010, the average return of -1.24% can be considered as an outperformance to the underlying markets which were down by more than twice as much.

May was marked by high risk aversion as concerns of the European sovereign debt came to the fore once again and disappointing macroeconomic outlook led to fears of slowing global growth. The month started off with a reversal of the growth trend in April, leading to significant losses for trend following strategies.

May 2011 and April 2011 returns across geographical mandates 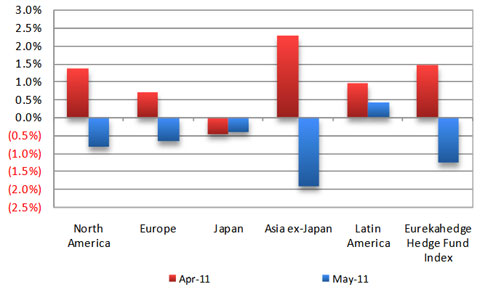 Although most regional mandates were negative for the month, downside performance was limited to less than 2% across the regions. Latin American hedge funds delivered the best performance, up 0.42% which is a significant outperformance to the underlying markets as the MSCI EM Latin America Index3 was down 3.18% during the month. Long/short equity and multi-strategy funds, which make up the bulk of the Eurekahedge Latin American Hedge Fund Index, were up 0.54% and 0.44% respectively, despite the losses witnessed in underlying markets.

Asia ex-Japan funds registerd the largest losses during the month, down 1.92%, as major market indices such as the SSE Composite, ASX and the Sensex finished the month in negative territory -5.77%, -4.98% and -3.31% respectively. North American hedge funds were down…