Despite an environment of increasing uncertainty in the markets, the global hedge funds sector has witnessed some strong trends in the first half of 2011. Chief among these trends: the industry attracted record inflows in the first 6 months of the year. As of end-June 2011, the size of the industry currently stands at US$1.81 trillion.

At the start of 2000, total industry assets stood at US$277 billion and over the next seven years, the sector witnessed tremendous growth to reach US$1.95 trillion; a seven-fold increase. However, the growth trend reversed in 2008 amid the credit crunch, collapse of large financial institutions, high-profile frauds and the subsequent financial crisis. The drying up of liquidity, heightened risk aversion and resultant widespread redemptions culminated in the worst yearly performance for the industry and the Eurekahedge Hedge Fund Index lost 10.63% in 2008. Additionally, performance-based losses led to further negative asset flows which resulted in greater losses as managers were forced to sell potentially winning positions. The industry reached its nadir in April 2009, with AuM falling to US$1.29 trillion – a drawdown of 33%. 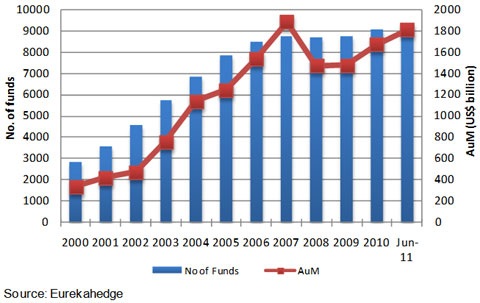 Since the start of the recovery phase in 2009, the industry has posted excellent growth both through performance as well as assets flows. The Eurekahedge Hedge Fund Index gained 34.6% in the period between...