The Asian hedge fund industry started 2013 on much firmer ground than compared to previous years. The Eurekahedge Hedge Fund Index gained 9.79% in 2012 and total assets under management (AUM) in the industry were up during the year – currently standing at US$127.4 billion. The industry witnessed some tough times and fickle fortune since the financial crisis and over the last five years the sector has faced numerous challenges.

After growing at a tremendous pace in the 2000 to 2007 time period, the number of funds increased eightfold and total AUM grew by nearly 800% to reach US$176 billion. Asian hedge funds were faced by heavy redemptions and significant losses during the financial crisis. The Eurekahedge Asian Hedge Fund Index fell by 20.29% in 2008 and by April 2009 the AUM declined to US$104.8 billion. The industry bounced back after April 2009 with managers posting excellent performance-based returns and also attracting some asset flows. Growth in the post-2008 period has been slow and it has yet to match what was seen in the industry in the years before the crisis. 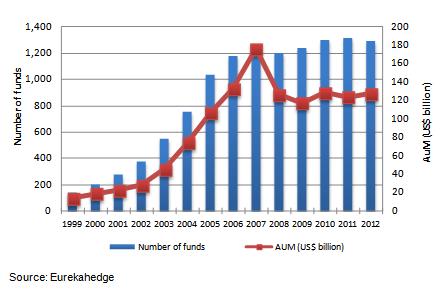