Hedge funds posted excellent returns in January on the back of resurgent risk appetite and rallying equity markets globally. The Eurekahedge Hedge Fund Index was up 2.24%1 during the month, the strongest January return since 2006 while the MSCI World Index2 gained 4.66% in January. The capital weighted Mizuho-Eurekahedge Index was up 1.59%.

All regional mandates finished the month with positive returns as risk appetite was given a boost early at the start of the year after US leaders reached an agreement to avert the ‘fiscal cliff’. Better-than-expected corporate earnings added steam to the rally while positive economic data further supported optimism in the marketplace.

January 2013 and December 2012 returns across regions 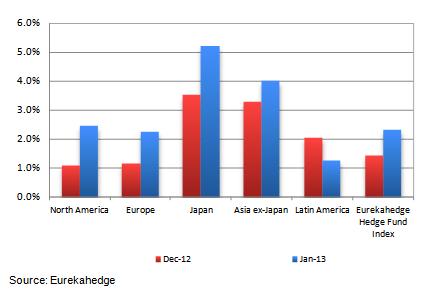 Taking the cue from performance end-December, markets continued their upward trajectory through January. Concerns of a global slowdown waned in the wake of upbeat news from Europe, the United States and China while corporate earnings added greater impetus to the rallies.

Hedge funds across all regions posted positive returns for the month with Emerging Europe and Asian hedge funds leading the way. The Eurekahedge Japan Hedge Fund Index delivered its strongest January return on record and the best monthly return since December 2005 ...