Hedge funds were up for the fifth consecutive month in March, a month that saw mixed returns in underlying market indices. The Eurekahedge Hedge Fund Index was up 0.69%1 during the month while the MSCI World Index2 finished with gains of 1.76%.

March witnessed diverging trends among global markets with US and European indices finishing with contrasting results. North America witnessed a continuation of the rally in equity markets amid a slew of positive economic data, while Japanese stocks also extended their winning run with further devaluation of the yen. European markets underperformed during the month as concerns over the region’s sovereign debt situation resurfaced due to Cyprus’ banking crisis and questions over its bailout.

March 2013 and February 2013 returns across regions 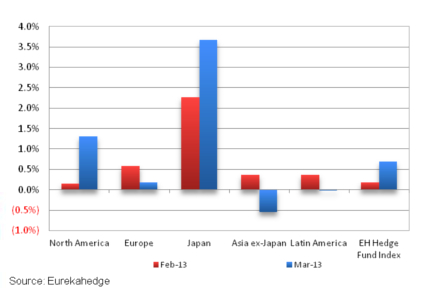 Returns were mixed among the various hedge fund regions with Japanese managers posting the strongest returns during the month. This was the seventh consecutive month of gains for Japanese hedge funds and the fourth consecutive month where the regional managers have outperformed their counterparts in other regions. The first quarter of 2013 was also the strongest quarter on record for Japanese hedge funds and managers also attracted some asset flows from investors in March after witnessing net outflows for seven months.