Hedge funds posted positive returns in April continuing their consecutive sixth month streak. The Eurekahedge Hedge Fund Index was up 0.87%1 during the month as most markets trended upwards. The MSCI World Index2 gained 2.02% in April.

The start of the month witnessed some profit taking from the equity markets amid some disappointing global economic data. The S&P 500 dipped below the 1550 mark by mid-month amid news of less-than-expected Chinese growth hit global markets. The markets brushed off the initial disappointment amid the earnings season, some positive economic data from the US and the installation of an Italian government in Europe. Commodity markets remained volatile during the month with most indices finishing April in the red as energy prices fell amid growing inventories in the US, while gold prices witnessed the largest daily price decline in 30 years amid rumours that other European banks might follow the Cyprus example and liquidate their gold reserves. 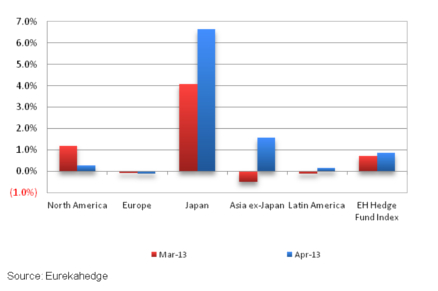 With the exception of Europe, all major hedge fund investment mandates delivered positive returns in April, and Japan focused managers posting the strongest returns for yet another month. The Eurekahedge Japan Hedge Fund Index was up 6.63% in April, bringing its year-to-date return to 18.55% and extending its winning run to the eighth month making it the longest winning streak on record for Japanese funds. The Nikkei 255 increased 11.8% during the month as the ‘Abenomic’ policies continued to yield dividends for the market.