The North American hedge funds industry has witnessed robust growth in 2013 with the total assets under management (AUM) breaching the US$1.3 trillion mark for the first time in May, raising the region’s share of global AUM to almost 70%. With strong launch activity since 2009, the total fund population has also reached the highest level on record with the total number of funds standing at 4891.

These figures reflect what could be termed as a complete recovery in North American hedge funds since the financial crisis, which reversed some of the strong growth witnessed in pre-2008. Between end-2000 and mid-2008, total AUM in the North American hedge fund industry grew from US$275 billion to US$1247 billion - a trend that was accompanied by strong launch activity which more than doubled the number of North American hedge funds. The advent of the global financial crisis led AUM to decline by 32% from their June 2008 peak to US$849 billion by April 2009; almost US$400 billion in less than a year. This period also witnessed a spike in attrition rate as managers faced redemption requests in addition to performance-based losses. The tide turned in March-April 2009 as global markets started to recover and redemption requests from investors slowed down. 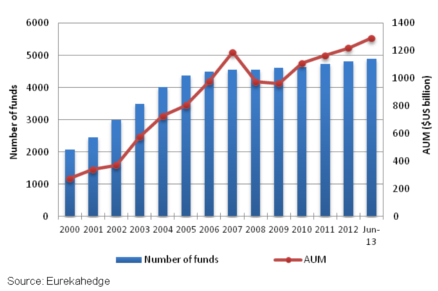 The industry witnessed its strongest returns on record in 2009 as the Eurekahedge North American Hedge Fund Index gained 24.55% during the year while also witnessing some positive asset flows during the latter half of the year. Healthy allocation activity was observed in 2010 and 2011 as the funds attracted US$144 billion from investors between January 2010 and August 2011.