Since the start of the new millennium the Latin American hedge fund industry has witnessed tremendous growth, both in terms of number of funds and assets under management (AUM). During this time the total number of funds in the industry has increased from just over 100 to nearly 500 – an increase of 500% in the fund population, while AUM has witnessed even more impressive growth. As at end-2000 total AUM in Latin American hedge funds stood at US$2.6 billion, while this figure stands at US$62.3 billion as at end-March 2013.

The industry witnessed some losses and redemptions during the financial crisis, amid falling equity markets globally and heightened volatility across different asset classes. Total AUM fell below the US$40 billion mark in 2009 as managers suffered some losses while investors withdrew substantial capital from the funds. In comparison to other regional hedge funds, the Latin American sector performed admirably through the financial crisis – the Eurekahedge Latin American Hedge Fund Index declined by only 5.70% in 2008 while the average global hedge fund posted losses of 9.76% during the year. 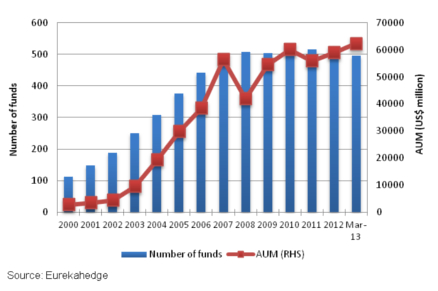 The sector witnessed a remarkable rebound after the first quarter of 2009, gaining more than US$15 billion in the last nine months of the year. Total AUM reached US$54.5 billion at the end of 2009 as managers gained US$5.9 billion through excellent performance and US$9.2 billion through net positive asset flows.