Global hedge funds have maintained a level of growth comparable with the strong gains seen in 2013, with robust allocation activity totalling US$65.3 billion in the first half of 2014. Combined with excellent performance-based gains of US$40.3 billion delivered by hedge fund managers this puts the current assets under management (AUM) of the industry at a new high of US$2.12 trillion. The global hedge fund population now stands at 10,844 funds strong as at June 2014.

Over the last 14 years the sector has witnessed varying trends – a period of tremendous growth, a major crisis and subsequent rebound. In year 2000 total assets in the global hedge fund industry stood at US$335 billion, managed by 2840 funds. Over the next seven and a half years the industry’s asset base grew by almost 500% to cross US$1.95 trillion by mid-2008. During this period the total fund population also increased by nearly 3.5 times.

The financial crisis in 2008 brought an abrupt end to this growth trend with assets falling to US$1.29 trillion by April 2009 due to performance-based declines and heavy redemptions by investors. The strong rallies in global markets during the last eight months of 2009 and subsequent positive asset flows in 2010 aided the industry’s recovery but concerns about the global economy and European debt crisis stalled this recovery in 2011 and most of 2012. 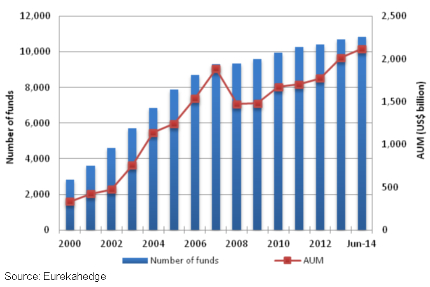 In 2012 this recovery was aided by strong performance-based growth even though the industry witnessed net outflows of US$3.8 billion.

Since then, improving macroeconomic data from the US has managed to shore up investor confidence while over in the East, Abenomics promised to be Japan’s salvation from years of economic stagnation and deflation. These factors combined have infused global markets with a new sense of optimism, leading stock market indices to new heights in 2013.