There has recently been a wave of global regulatory reforms which affect fundraising. These changes are far-reaching and can impact how fund managers structure funds, their proposed investor base, how and where funds are marketed, the remuneration that may be received, registrations that may be required and dealings with investors.

The majority of new regulation continues to be a reaction to the global financial crisis.

Financial services regulators worldwide have focussed on the key themes of investor protection, investor suitability, and the mis-selling of complex products. There have been changes to the ‘retail investor test’ in many countries, including in Singapore, Hong Kong and the United States, as well as proposed changes in Australia. There has also been a sharper focus on the quality of financial advice and transparency of remuneration arrangements, for example in Australia with the Future of Financial Advice (FoFA) reforms, in the UK with the Retail Distribution Review and in Europe through the proposed second iteration of the Markets in Financial Instruments Directive (MIFID 2). This follows an initial move in various countries to introduce licensing and/or disclosure regimes for wholesale funds, such as private equity funds, where they did not have them previously e.g. the European Alternative Investment Fund Managers Directive (AIFMD) and the Investment Advisers licensing regime introduced under the Dodd Frank reforms in the United States.

There has also been a focus on financial stability and systemically important institutions and their activities, relevant to both the AIFMD and the Volcker Rule reforms in the United States.

Many of the new regulatory changes are designed to harmonise regimes across different countries. These include the proposed Asia Region Funds Passport, the proposed ASEAN CIS Framework for Cross-Border offering of Funds and the AIFMD. A related theme is international cooperation and exchange of information, including most recently the OECD Common Reporting Standard (CRS) proposals to combat cross border tax avoidance (a result of the recognised success of the U.S. Foreign Account Tax Compliance Act (FATCA), as well as greater transparency in other areas, including in relation to underlying investments (e.g. AIFMD requirements and recent superannuation fund transparency requirements introduced in Australia).

While we have seen cooperation, we have also seen the flexing of international muscle, with purely extraterritorial legislation serving a country’s own interests. FATCA showed us that it is possible for a country to impose domestic legislation on the rest of the world, particularly if that country is a significant world power and wields a big compliance stick in the form of a 30% withholding tax.

As products, services and customer bases become increasingly globalised, a key inefficiency continues to be the great divergence between domestic laws of different countries. Global reforms are difficult to implement: creating effective global change requires a deep understanding of how other legal systems work, the role of law within a country’s governmental and political system, and how laws are interpreted locally. It requires a true comprehension of the ‘translation effect’ of the particular global reform in the target countries. This level of engagement is generally impractical and far beyond the ambit (and resources) of the relevant legislator. Consequently, we often end up with a global baseline reform which is implemented differently in different countries, which in turn increases compliance costs for financial institutions that deal in a globalised market. This has been particularly well illustrated by the implementation of both the AIFMD and FATCA. 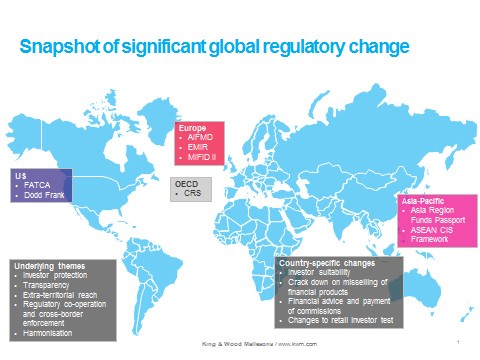 In this article, we will focus on current key global reforms that significantly impact investment funds. Namely AIFMD, the Investment Advisers Act, the Volcker Rule, FATCA and CRS.

1. Marketing an alternative investment fund into Europe under AIFMD

The AIFMD regulates the marketing and management of AIFs throughout Europe. In relation to fundraising in particular, it gives authorised fund managers a marketing passport so that they can freely market European AIFs to European professional investors.

Unfortunately, non-European managers cannot currently obtain a marketing passport and at this stage can only market AIFs to European investors under the national private placement rules (NPPRs) of each relevant country. These rules vary significantly between countries. Consequently, non-European managers are likely to experience some or all of the following issues in seeking to market AIF to European investors:

Consequently, before considering fundraising in Europe, non-European fund managers should:

We have seen growing interest in the likely introduction of an EU-wide passport for non-EU managers, although there are concerns about implementation and timing at present.

2. U.S. Investment Advisers Act: can you rely on an exemption?

Many fund managers may have difficulty meeting this test.

The private fund adviser exemption is available solely to private funds advisers/managers. However, an adviser with its principal office and place of business outside of the U.S. may rely on this exemption if:

An adviser that relies upon the private fund adviser exemption is subject to certain reporting and compliance requirements of the Advisers Act (including filing a Form ADV Part 1A with the SEC).

It is therefore important to determine the status under the Advisers Act and register or comply with relevant exemption requirements as appropriate.

Generally, the Volcker Rule states that a 'banking entity' may not, as a principal, directly or indirectly:

A 'covered fund' means any issuer that would be an investment company as defined in the Investment Company Act and would have to register with the SEC but for the exemptions set out in sections 3(c)(1) or 3(c)(7) of that Act. Broadly, this would include most private equity and hedge funds.

A banking entity ‘sponsors’ a ‘covered fund’ if it:

FATCA was introduced by the U.S. government to combat U.S. tax evasion by requiring foreign financial institutions to conduct due diligence on their account holders and to report details of certain U.S. account holders to the U.S Internal Revenue Service (IRS) or to their local regulator (who will share such information with the IRS). If your fund is a Reporting Financial Institution under FATCA, you will need to undertake FATCA due diligence on your investors and comply with FATCA reporting requirements. Funds that do not comply with FATCA face the risk of a 30% withholding tax being deducted from certain U.S. source payments made to them.

FATCA has caused a global headache for financial institutions. Its U.S. legislative design was difficult to transpose to foreign structures, products and legal systems and required multinational groups to adopt different FATCA procedures depending on the jurisdiction of the relevant group entity. FATCA compliance costs have been considerable, not helped by the lengthy finalisation process of the detailed FATCA regulations.

Despite this, governments worldwide have recognised the success of the U.S. in effectively outsourcing its tax auditing processes to foreign financial institutions through FATCA, and OECD member countries have supported the push for global tax information exchange through the CRS. The CRS will impose similar due diligence and reporting obligations to FATCA, in respect of accounts owned by residents of any OECD member country that has committed to the CRS. As more than 90 countries have committed to the CRS, conducting due diligence and reporting on all of these residents will be no small task.

Although the CRS is based on the FATCA 'Model 1' intergovernmental agreement, it differs in certain material respects. In particular, you should be wary of the following:

Unlike the FATCA implementation experience, the CRS has been issued in final form. Due diligence obligations commence for funds resident in any of the 51 ‘early adopter’ countries (including the Cayman Islands, the United Kingdom and Luxembourg) on 1 January 2016; for funds resident in any other CRS country, obligations commence on 1 January 2017. You should start your CRS preparations now.

Dealing with change: the way forward

The only effective way to deal with global reform is to comply. Unfortunately, compliance typically requires time, cost, stamina and, in many cases, an ability to step outside of your own domestic law construct to consider the ‘translation effect’ of the reform on your particular fund structure and your proposed fundraising strategy. It may well feel like as soon as you have dealt with one global reform, another one swoops in to grab your attention and your wallet. One thing is certain: regulators have developed a taste for new global regulation, which doesn’t look set to change any time soon. To put your fund and your fundraising strategy in the best possible position, you should make sure you understand how current reforms may affect you and keep a careful watch out for the reforms on the horizon.

Suzanne Gibson is a special counsel in the Singapore office of King & Wood Mallesons. She advises fund managers on fund establishment and related funds management issues and has particular experience in the establishment of highly structured European real estate funds, having worked in Luxembourg. Suzanne acts for investors investing into alternative investment funds and provides Australian regulatory advice to non-Australian fund managers seeking to offer their funds in Australia. Suzanne advises financial institutions in relation to the U.S. Foreign Account Tax Compliance Act (FATCA) and the OECD Common Reporting Standard.

John Sullivan specialises in investment funds, capital raising and securities, and M&A. He is a cross-border expert, with particular focus on the real estate, infrastructure and financial services sectors. Having been extensively involved in cross-border Asian transactions for over a decade, John is recognised as a leading lawyer by Asialaw, Chambers Global, Chambers Asia Pacific and Euromoney. Chambers Asia Pacific notes John as being “called on for his extensive understanding of fund establishment and fund raising in Asia” and that “peers commend his Asia focus and cross-border capability, while clients attest that he is ‘responsive, technically brilliant and commercially aware’”.

Strategically positioned in the world’s growth markets and financial capitals, King & Wood Mallesons is powered by more than 2,700 lawyers across more than 30 international offices spanning Asia, Australia, Europe, the Middle East and North America. As the only firm in the world able to practise PRC, Australian, Hong Kong, English, US and a significant range of European laws as an integrated global law firm brand, KWM is providing clients with deep legal and commercial expertise, business acumen and real cultural understanding on the ground where they need it most. For more information, please visit the website at www.kwm.com.