In 2000, the European hedge fund industry had 470 funds managing a total of US$38.6 billion in AUM. Over the course of the next seven years, the industry saw tremendous growth with AUM peaking at US$472.8 billion by October 2007. The onset of the global financial crisis dealt a serious blow to the industry with managers seeing large redemptions and heavy performance-based losses – the Eurekahedge European Hedge Fund Index dropped by 17.4% in 2008 with AUM declining by 37.9% from their 2007 peak to bottom out at US$293.6 billion by March 2009. With a rebound in global markets in the second quarter of 2009, the European hedge fund industry also reversed the downward trend by posting excellent performance-based gains and also attracting some assets from investors. By the end of 2009 total assets in European hedge funds had reached US$346.5 billion. 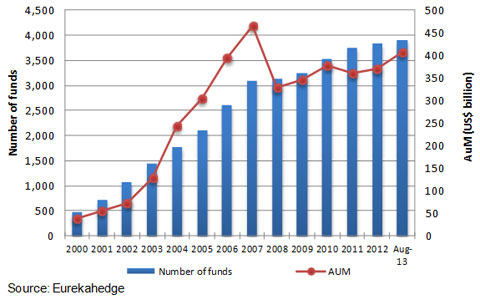 In 2010, the fortunes of European hedge funds waned once more amid the sovereign debt crisis. Although European managers posted some healthy returns and offered downside protection they witnessed net outflows during the first eight months of the year.