Since the start of the new millennium, the Latin American hedge fund industry has witnessed tremendous growth, both in terms of number of funds and AUM. During this time the total number of funds in the industry has increased from just over 100 to nearly 400, while AUM has witnessed even more impressive growth. As at end-2000 total AUM in Latin American hedge funds stood at US$2.5 billion, while this figure stands at US$59.1 billion as at end-September 2014.

The industry witnessed some negative returns and redemptions during the financial crisis, amid falling equity markets globally and heightened volatility across the various asset classes. Total AUM dipped below the US$40 billion mark in 2009 as managers suffered some losses, coupled with investors withdrawing substantial capital from the funds. In comparison to other regional hedge funds, the Latin American sector performed admirably through the financial crisis – the Eurekahedge Latin American Hedge Fund Index declined by only 5.82% in 2008 while the average global hedge fund posted losses of 9.73% during the year. Since then, the industry has posted a remarkable recovery and over the next two years, the region posted excellent gains while also attracting substantial investor capital. By April 2011, the AUM of Latin American hedge funds had reached a historical high of US$64.2 billion. 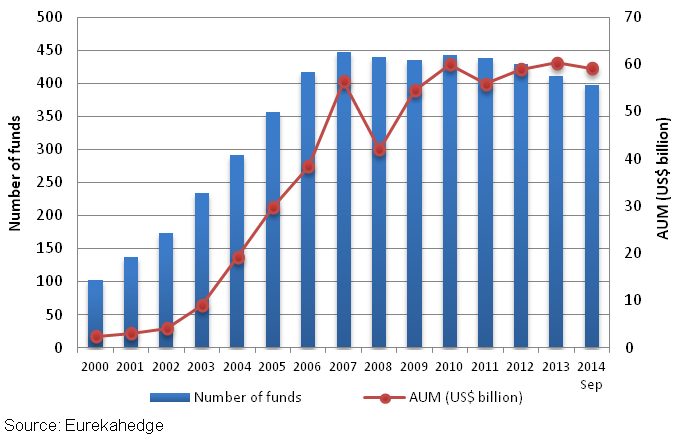 Market sentiment began to sour towards the latter half of 2011 due to overwhelming concerns about the European debt crisis and the strength of the global economy. This clouded the outlook for Latin America as well, resulting in a decline in AUM primarily due to net negative asset flows in 2H 2011.

2013 was a mixed year for Latin American hedge funds. Although they managed to successfully outperform underlying markets, fund managers have had to contend with net asset outflows of US$0.4 billion as the Federal Reserve announced its intention to begin tapering its quantitative easing program, causing investors to begin pulling their capital from overseas emerging markets, where they had been chasing yield.