Hedge funds registered their second consecutive month of losses in October, closing the month down another 0.27%1, underperforming underlying markets as the MSCI World Index2 gained 1.15% after a wild month. Concerns about global growth prospects amid a deflationary environment prompted a rise in investor risk aversion in the earlier half of October, sparking a global sell-off which drove the S&P 500 Index briefly into correction territory, with US 10-year treasury yields dipping below 2%. However, the market subsequently made a sharp recovery in the latter half of the month, lifted by a positive slew of economic data including strong corporate earnings and GDP numbers. Even as the Federal Reserve officially ended its quantitative easing programme this month, central banks elsewhere remain committed to tackling deflation. The ECB maintained its firm stance on an expansionary fiscal policy as growth and inflation in the region remained weak, while the Bank of Japan (BoJ) surprised financial markets with the magnitude of its quantitative easing, causing the yen to weaken further against the greenback. 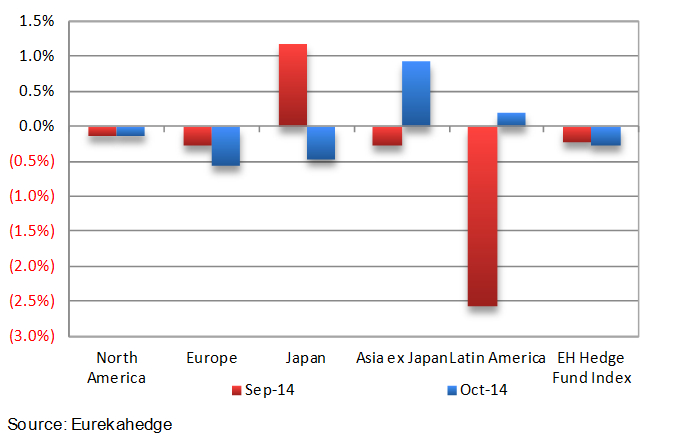 Asia ex-Japan managers were the best performers during the month, returning 0.93% as markets in Greater China advanced on hopes that Chinese authorities will soon ease monetary conditions in a bid to engineer a soft landing for the economy. Latin American funds were also up 0.19% as Latin America’s biggest economy, Brazil, pared gains towards the end of the month when President Dilma Rousseff overcame her pro-business rival by a narrow margin to win the elections. The Eurekahedge North America Hedge Fund Index lost 0.14% despite the US S&P 500 Index gaining 2.32%, bolstered by recent positive US economic data, rising consumer confidence, falling jobless claims and expansionary PMI numbers - putting the US on track towards rate normalisation given its employment and inflation targets. The same scenario happened for Japanese managers, who lost 0.47% even as the benchmark Nikkei 225 index closed October up 1.49% as the BoJ announced an expansion of its monetary base, with momentum further building as the US$1.2 trillion Japan Government Pension Investment Fund (GPIF) announced of an increase in its allocation towards equities.