Hedge funds edged lower to close 0.10%1 down by the end of July, following underlying markets as the MSCI World Index2 lost 0.83% during the same period. Equity markets around the world saw mixed gains, with the strongest performers being Asia Pacific and Latin America while North America and Europe suffered losses. North American and European stock indices actually traded higher during July despite rising geo-political tensions between Russia and the west before taking a steep dive in the closing week, finally giving way as a slew of international crises weighed in on investor sentiment, including but not limited to: Israel’s strikes on Gaza, Portuguese bank bailout, trade sanctions against Russia and the Ebola epidemic in Africa. Meanwhile in the US, strong second quarter growth numbers continue to create increasing anxiety regarding the timing for the Fed’s abandonment of its zero-interest-rate policy, with the US dollar appreciating sharply on the back of the stronger economy and expectation of incoming interest rate hikes. Asian markets evaded this overall negative sentiment as healthy macroeconomic numbers from China gave a boost to regional equity markets, while Latin American markets were marked by Argentina’s second default in 13 years. 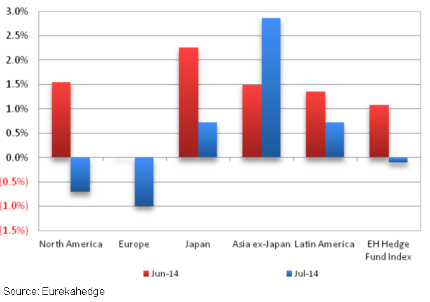 Asia ex-Japan managers were the best performers during the month, returning 2.87% as regional markets were lifted by improving macroeconomic data coming out of China which appears to have backed away from the edge. The best gains were seen in Greater China, with the buoyant mood spreading to Japanese stocks as well, contributing to the Nikkei 225 Index’s 3.03% gain in July. Japanese managers were up 0.72% during the month.