Hedge funds followed global equity markets higher to close 1.25%1 up by the end of June, with the Eurekahedge Hedge Fund Index reaching another new high during the month. Global equity markets saw another month of broad-based gains in June, with the strongest performers being Asia Pacific and Latin America for the emerging economies and North America for developed economies. Central bank policy remains one of supporting economic recovery, with the Fed continuing to reaffirm its stance on keeping interest rates low ‘for a considerable time’ after the end of tapering, while the ECB initiated negative rates on bank deposits in an unconventional move to raise inflation to target levels. While tensions in Ukraine appear to be easing, instability has begun brewing again in the Middle East, threatening to disrupt global oil supplies.

Figure 1: May and June 2014 returns across regions 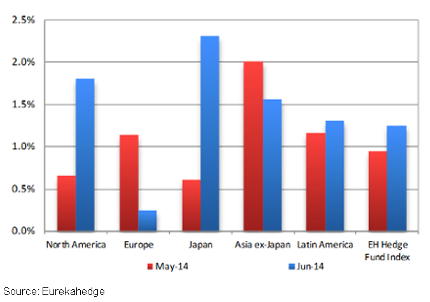 All hedge fund regional mandates ended the month in positive territory. Japanese managers were the best performers during the month, returning 2.31% supported by encouraging earnings reports and improvement in China’s manufacturing activity. Furthermore, the Japanese GPIF has signalled a planned increased in its allocations to domestic equities, a move which is likely to see investors buy back into their bullish bets on the Nikkei.