Funds of hedge funds had a sluggish start to the year, with the Eurekahedge Fund of Funds Index gaining 0.53% in the first quarter of 2014. They enjoyed somewhat better performance during the previous year in which they reported gains of 8.16%, outperforming single managers who gained 8.10% collectively in 2013 with a higher risk factor. Although the industry continues to face heavy redemption pressure, assets under management (AUM) of the industry saw some respite in the first quarter of 2014, with AUM holding steady at US$524.5 billion managed by a total of 3,145 funds.

The funds of hedge funds sector grew at an accelerated pace in the 2002 to mid-2008 period, increasing the size of the industry from less than US$100 billion to a maximum of US$826.2 billion by March 2008. This growth in assets was accompanied by a simultaneous increase in the fund population, with the total number of fund of hedge funds increasing from below 1,500 to nearly 3,700.

This trend was reversed with the advent of the global financial crisis and the AUM of the industry took a sharp turn for the worse after steep losses and heavy redemption pressure from investors, causing a number of multi-managers to close shop in the difficult market environment. Funds of hedge funds have never quite recovered from this harrowing experience, currently standing at US$524.5 billion, 36.5% below its 2008 peak. 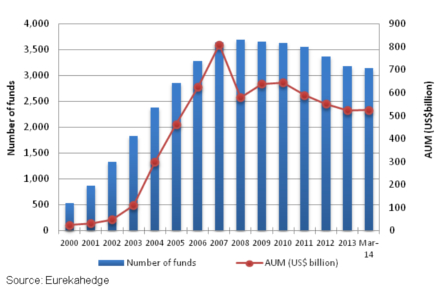 Following the turbulent times in 2008 and early 2009, funds of hedge funds witnessed a recovery of sorts in 2009. Most of the gains came from performance during 2009; the Eurekahedge Fund of Funds Index was up 9.91% as hedge funds posted record returns amid active central bank intervention to ease market liquidity.