Figure 1: Africa today compared to Latin America and Asia in 1997 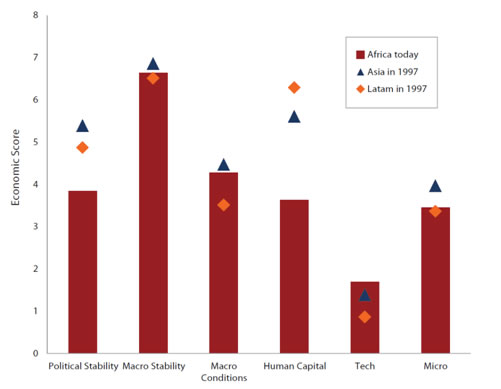 African and Middle Eastern countries have made substantial economic strides, undertaking impressive reforms and liberalising their economies and capital markets. This has resulted in smaller public and private deficits, more prudent use of commodity windfalls, lower levels of debt, and higher international reserves. Inflation has also improved, standing at 6% in 2012, down from 26% in the 1970s and 19% in the 1980s.

Fueled by domestic demand, GDP growth for Africa and the Middle East has averaged 5.5% over the last decade, lagging Asia but beating the rest of the world. The region is now forecast to grow annually at 5% on average for the next five years (source: IMF). A huge debt relief programme in Africa has also helped bring debt-to-GDP ratios to manageable levels, dropping to 20%.

Meanwhile, the region boasts a population of more than 1 billion people, with 60% under the age of 24 (source: United Nations World Population Prospects). In fact, the region is set to have the world’s largest workforce by 2040.

Most tellingly, foreign investment is pouring into the region, with China contributing US$100 billion from 2005 to 2010 — one-third of its entire foreign direct investment during that period.

An uncertain political environment within the region has long been used as a reason to limit investment. Encouragingly, a number of countries are showing signs of greater political stability in recent years. Over the last decade, the region has undergone a dramatic transformation as countries have emerged from civil wars and toppled dictators.

Within the region, a new generation of political and business leaders is emerging, focused on economic growth and providing conditions under which businesses and economies can flourish. Policies are more targeted to encourage growth, and foreign investment is being harnessed to help build sustainable conditions for that growth.

Even troubled countries like Libya and Syria do not dampen excitement about opportunities in the rapidly changing region. Though they must be monitored, they have little, if any, impact on the growth prospects of the region overall. There are 65 countries within the investable universe, so there is no problem seeking other interesting opportunities.

The greatest challenge is to work out how much of what we see and hear in the media is relevant and then bridging the gap between the trouble spots and the opportunities. Demonstrating to investors that the investment opportunity is huge despite what we see in the media is perhaps the most difficult obstacle.

Robust top-down credentials and broad structural changes across the region have created enormous opportunities for investors. It is possible to find numerous companies that could deliver at least 20% annual earnings growth for the foreseeable future, yet are valued incorrectly.

Wealth of opportunity across the region

Within the region, we see opportunities in countries that investors aren’t hearing about in the media.  Saudi Arabia, Qatar, United Arab Emirates, Nigeria and South Africa are some of our favoured countries.

Saudi Arabia has been investing aggressively, and there are plans to spend close to US$700 billion on infrastructure projects as well as building several “economic cities” across the country. The government is making major financial commitments to develop the country’s electricity grid, waterworks, and telecommunications network. Saudi banks are an especially promising investment opportunity as financing is the first step in any infrastructure project.
Qatar is on the verge of a build-out ahead of the 2022 FIFA World Cup. The country is expected to spend at least US$140 billion on transportation infrastructure, including roads, a metro system, and an airport expansion. Banks and infrastructure-related companies are likely to be significant beneficiaries of the heightened government spending.

In the United Arab Emirates, many companies are benefiting from a faster-than-expected and broadening recovery in the property and banking sectors. The UAE’s emergence as a trade and transportation hub has increased tourism and Dubai’s safe-haven appeal amid continued unrest in Middle East countries such as Syria and Egypt. Both Qatar and the UAE are also increasingly likely to garner greater attention from global emerging markets investors after the recent upgrades by MSCI.

Sub-Saharan Africa has some of the fastest-growing economies around the world, including Nigeria, Ghana, Kenya, and Zambia (Figure 2). Some countries, such as Mozambique and Tanzania, have made significant oil and gas discoveries which could potentially prove transformational for their economies. Across the continent, the banking sector is particularly attractive, especially in Nigeria, where bank balance sheets are much stronger following a system-wide cleanup of bad loans and the establishment of a “bad bank”. Outside of the banking sector, consumer staples companies show promise, particularly some of the food & beverage companies who are especially good at leveraging the huge growth in consumer spend within Africa.

South Africa offers one of the best ways to access the African story. The country has several companies with some of the best management teams in the emerging markets universe, a well-developed financial system, and companies with successful penetration into other African countries where growth is stronger. Often these companies can provide exposure to parts of Africa that are otherwise inaccessible to investors (due to a lack of liquidity or stock market). There are interesting opportunities within the telecoms sector, while we have also invested in Africa’s largest food retailer.

Some of these markets are at the beginning of their evolution, bringing its own inherent challenges. Bottom-up, fundamental research is imperative to understand both the opportunities and risks associated with this nascent asset class. Investors should approach the region with a long-term focus.
Available information is often sparse, local regulations are varied and complex, and research coverage by analysts and brokerage firms is limited – obstacles that emerging markets encountered 20 years ago. Challenges such as these can create opportunities for investors to uncover neglected companies with healthy or improving operations, and to identify stocks that have been ignored by the mainstream investment community.

The long-term fundamental reasons for investing in Africa and the Middle East are robust with a large opportunity set and genuine prospects to generate positive returns. Today’s emerging markets will eventually become part of the developed world, and investors will again look for the next emerging story. Africa and the Middle East is one of the fastest-growing regions in the world, and the increasing
ability of companies to harness that growth for profitability creates great opportunities for investors.

This article is provided for information purposes only and is not intended to reflect a current or past recommendation, investment advice of any kind, or a solicitation of an offer to buy or sell any securities, T. Rowe Price products or investment services. Past performance cannot guarantee future results. Information contained herein is based upon sources we consider to be reliable; we do not however guarantee its accuracy. This article provides opinions and commentary that do not take into account the investment objectives or financial situation of any particular investors or class of investor. Investors will need to consider their own circumstances before making an investment decision. The views contained herein are as of November 2013 and may have changed since that time.