Hedge funds delivered their fourth consecutive month of positive returns as global markets ended the year on a positive note. The Eurekahedge Hedge Fund Index was up 0.98%1 during the month while the MSCI World Index2 gained 1.67% in December.

Global markets digested the news of the much awaited QE tapering as the Fed reiterated its resolve to keep interest rates low in order to sustain a continued recovery in the US economy. While North American and European markets edged upwards on the news, emerging market fears over capital outflows resurfaced with the MSCI Emerging Markets Index3 declining 0.93% during the month. Asian markets were mixed during the month as tightening liquidity in mainland China coupled with a decline in the country’s PMI gauge dampened investor sentiment.

November and December 2013 returns across regions 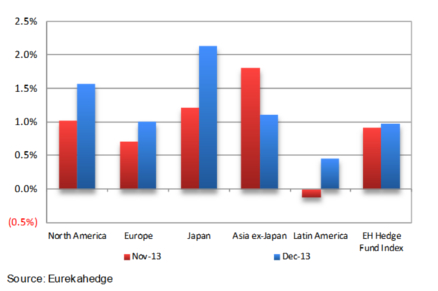 All major hedge fund investment regions witnessed positive returns during the month. The Eurekahedge Japan Hedge Fund Index saw the strongest gains among all regional mandates – up 2.13% in December. Japanese fund managers posted yet another month of positive returns as the Nikkei 225 Index climbed 4.02% during the month, helped by a fall in the value of the yen which depreciated 2.68% against the US dollar. North American managers were up 1.57%, (10.18% for the year) as equity markets rallied to new highs with the NASDAQ, S&P500 and DJIA gaining 2.87%, 2.36% and 3.05% respectively during the month.