Hedge funds were down 0.48%1 in January, outperforming underlying markets as the MSCI World Index declined 3.74%2 during the month with global markets off to a bumpy start in 2014. Global markets trended downwards during the month led by weak US jobs data and discouraging PMI numbers from China. Market sentiment weakened further towards the month-end as the Fed announced another round of QE trimming which catalysed investor flight from emerging economies and led credence to concerns regarding the health of the global economic recovery. Emerging market currencies also came under sharp selling pressure with markets watching carefully as the global economy transitions to a post-QE world. 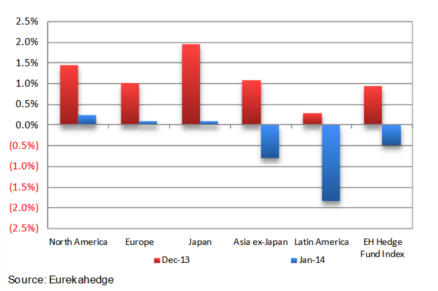