Hedge funds bounced off the lows in January to finish the month up 1.79%1 as global equity markets recovered with the MSCI World Index2 gaining 3.87% during the month. Market sentiment held strong as weaknesses in recent US macroeconomic data were largely attributed to the weather conditions, with Fed chair Janet Yellen reaffirming the need to keep the QE tapering on track as the US economy continues its recovery. Emerging markets also showed signs of stability with the MSCI Emerging Market Index3 rising 2.15% during the month. Positive macroeconomic data from the Eurozone showed acceleration in manufacturing activity which provided further support to the markets, while tensions surfacing in Crimea towards the month end failed to dampen investor sentiment. 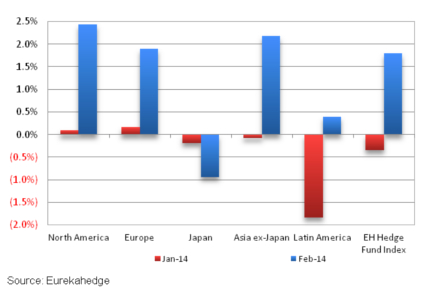 All hedge fund regional mandates ended the month in positive territory with the exception of Japan focused hedge funds, which were down 0.94% during the month. Japanese equity markets continued to lose ground despite the global recovery as the developing situation in Ukraine brought about a rise in the yen as a safe haven currency, reducing the competitiveness of Japanese exports and pushing down Japanese stock prices.