Hedge funds rebounded strongly in May following April’s and March’s losses to finish the month up 1.12%1, with the Eurekahedge Hedge Fund Index reaching new heights during the month. Global markets trended upwards as the Fed reiterated its dovish stance on keeping long term interest rates low in order to sustain an ongoing recovery in the US economy after GDP figures showed that the US economy had contracted in Q1 2014. Similar support built up in the Eurozone region where market participants expected the ECB to ease its monetary policy to stave of deflation worries, an expectation that was correctly realised when the ‘Draghi put’ was officially executed earlier this month in the form of negative interest rates on bank deposits. In Asia, China’s encouraging PMI data coupled with an improving trade surplus and a resolve on part of the CCP to liberalise the mainland’s capital markets allayed fears of sharp slowdown in Asia Pacific’s largest economy. While in Japan, improving data on inflation, following the sales tax hike along with an optimistic outlook for the economy by IMF added hope that an Abenomics driven recovery was still on track. Elsewhere in the world, markets welcomed the prospect of reduced tensions in Ukraine and the election of Modi at the helm of India’s economy as promising signs conducive to growth in the emerging economies.

Figure 1: April and May 2014 returns across regions 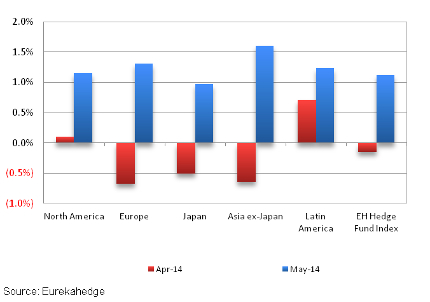 All hedge fund regional mandates ended the month in positive territory. Asia ex-Japan managers were the best performers during the month, returning 1.60%, supported by encouraging news out of the world’s two most populous countries - China and India. Expansionary PMI data from China did much to allay investor concerns, while the election of pro-business party BPJ in India led to soaring equity markets in the country.