The comparison in the wealth creation chart demonstrates how well the European hedge fund markets have performed versus the local equity markets this year. The month of May continued with the good showing; the Eurekahedge European Hedge Fund Index was up 32 basis points as compared to the local equity index, which was down 17 basis points over the same period. Out of all the funds with a European mandate, around 70% of funds have netted positive returns till May 05.

In terms of strategies, the better performers of the month were distressed debt, long/short, fixed income and relative value hedge funds. In contrast, the worst performers in May have been the directional strategies.

The month of May continued to be a dismal month for convertible arbitrage funds, which saw a negative return of 58 basis points. Also in the red were multi-strategy, CTA and event driven funds; the latter two however remained well in the positive territory on a year-to-date basis. 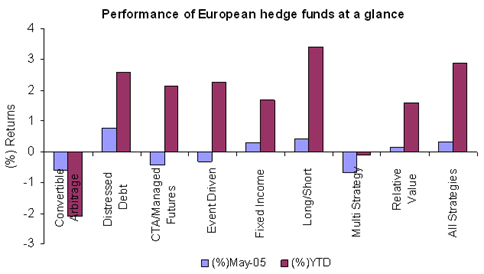 This is due to the combined positive performance of all strategies except convertible arbitrage which continued to suffer.

CTAs recovered some lost ground in May, netting an impressive positive return of 171 basis points though it needs a couple more good months like this in order to return to positive territory. 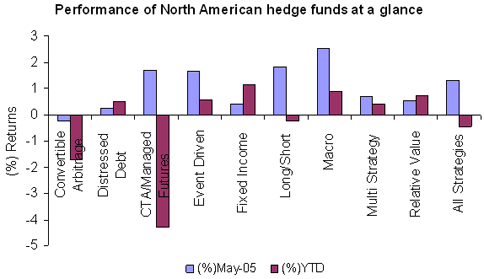 Other impressive performers in May were event driven, macro and most interestingly, long/short funds which managed to pull off a stellar month, wiping off most of its year-to-date losses.

2005 has been flat so far with May being no exception. The Eurekahedge Asian Hedge Fund Index posted zero returns on an overall basis which corresponded with the MSCI AC Asia Pacific Equity Index.

The top three performers in May were relative value, distressed debt and event driven funds respectively.

Macro, convertible arbitrage and multi-strategy funds were the worst performers for the month. These directional strategies seem to have faced difficulty in the flat markets with low volatilities but long/short equities managed to pull it off, posting marginal positive returns for May. 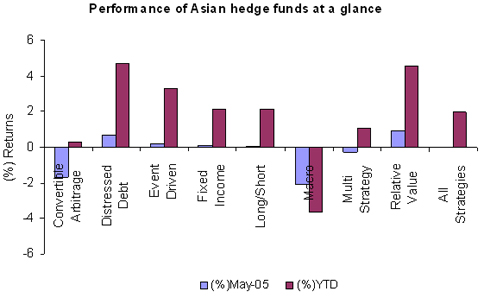 Overall, 53% of all Asian strategy funds reported positive returns for May and 70% were in positive territory on a year-to-date (Jan 00 to May 05) basis.

The major drivers of the growth for May 05 have been primarily fixed income and multi-strategy funds, both netting sterling returns of 151 and 172 basis points respectively. Long/short funds also did well by gaining 96 basis points. Relative value funds made an impressive comeback, returning to the black with a positive return of 65 basis points.

CTAs were the worst performers of the lot and have been in the red since the beginning of the year.

On the wealth creation front, the Eurekahedge Latin American Hedge Fund Index (Onshore) beat the MSCI Latin American Equity Index by 52 basis points for the year till May 05. However it couldn't keep up with the pace of the booming Latin American equity markets in May 05.

Notwithstanding, May 05 saw a generally good performance by the onshore LATAM hedge funds. 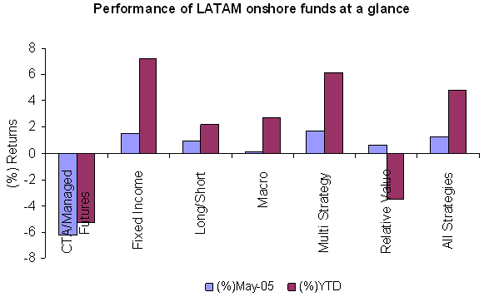 Continuing with the broad trend for the year, the month of May saw largely flat returns for the offshore managers. The only impressive gainer for the month was event driven hedge funds, netting a positive 228 basis point return.

All other strategies except macro remained in the positive territory in May.

Despite a satisfactory performance in May, the offshore managers have a lot of catching up to do to bring themselves up on par with its onshore counterparts. 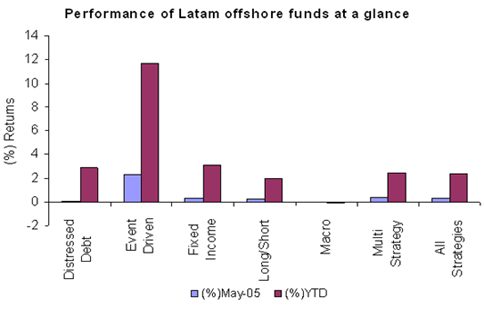