"Growth is the only evidence of life."
– Cardinal John Henry Newman

Much has been written lately about the high rate of growth in the number of Singapore-based hedge fund managers. A conducive regulatory environment coupled with the relatively low cost of operations have both contributed to the unprecedented growth of hedge funds in Singapore over the last couple of years. Yet, notwithstanding these, gaining critical mass still seems to be an elusive goal for many Singapore-based hedge funds. In this regard, Singapore lags substantially behind vis-à-vis its peers in Hong Kong and Japan (Figure 1).

Figure 1: Assets under Management in US Dollars

About 30% of Singapore-managed hedge funds have less than US$10 million of assets under management (AUM) as compared to about 13.5% for Hong Kong and 23% for Japan. The approximate break-even point for a Singapore hedge fund manager (ie the point at which the fund's management fees cover the expenses incurred) occurs at around approximately US$20 million in AUM. This means that about one third of Singapore-based hedge fund managers currently do not fully cover their operating costs, resulting in many being financed through shareholder capital injections or loans.

At the other end of the spectrum, the larger funds with the assets under management of over US$100 million are still not very prevalent – they comprise about 21% of Singapore-managed hedge funds versus 32% in Hong Kong and 42% in Japan. However, there is a marked improvement over the last year (Figure 2) in the growth of those larger funds.


Figure 2: Assets under Management in US Dollars 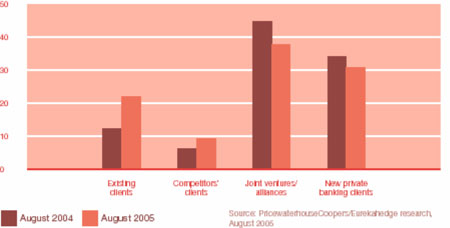 Singapore-managed hedge funds are relatively new in the financial services scene as their boom commenced only three to four years ago. In Hong Kong and Japan however, hedge fund activities started in the mid to late 80's. Historically speaking, allocators making stops in Asia would more likely have chosen Hong Kong and Tokyo; however, things are changing. Singapore is starting to make its mark, especially as it is increasingly regarded as the place which attracts "lifestyle" professionals, offers high standards of living at a reasonable cost, and provides a favorable environment to raise a family.

What then are some of the possible steps that hedge fund managers could take to raise their funds' AUM above the break-even point and into the profit zone?

There are a few options

One approach may be to partner up with a seeder fund, ie a fund that specialises in giving capital to fledging hedge fund start-ups. The caveat of this option however, is the need to give up a percentage of ownership in the fund management company to the seed capital investor. Relinquishing part of the stake, ie management control, is never an easy decision for start-ups who have a vision of being their own masters.

Attending investor conferences, making presentations, pitches and face-to-face meetings with allocators globally, are also common strategies undertaken. Anecdotal evidence suggests that the "legwork" can pay - some successes relate to managers who raised respectable sums after circling the globe several times over, if one were to add up the air miles clocked. This however, requires a significant amount of time investment and effort.

Some hedge funds have taken a less aggressive stance to their business model. They believe that concentrating on performance at the outset, rather than fundraising, is more important, and that the performance should speak for itself in the eyes of the allocators in the longer term. This approach of course requires deep confidence in the ability to generate excess returns in the short to medium term, and of course, high cash reserves and/or a very low burn rate.

The AUM "chicken-and-egg" scenario is, unfortunately, still a common issue for Singapore hedge fund managers. Principally, if they start small, the large institutional players may refrain from investing in them because of the risk of becoming a majority shareholder of the fund. On the other hand, if the hedge fund managers cannot attract large investors, they are unable to grow the fund to a critical size either. This self-perpetuating vicious cycle is hard to break.

So what exactly can be done to promote faster growth in hedge fund AUM so as to boost the Singapore hedge fund industry?

For one, enhancing existing rules such as the "80/20 rule" would go a long way in promoting such growth. Among other things, the current "80/20 rule" requires that hedge funds managed out of Singapore to maintain at least 80% or more of foreign-sourced AUM.

Earlier this year, the Monetary Authority of Singapore relaxed the rules by exempting new start-up funds from the "80/20" requirement for the first year of operations. However, getting all the systems in place, recruiting personnel, finding office space and more, may take a hedge fund manager up to six months. After which, the manager only has half a year to make sure the foreign investors contribute more than 80% of the fund. This is not an easy task, considering that the hedge fund managers are more often than not the fund's initial investors.

As tax rules take into consideration residency in addition to the citizenship for the "80/20 rule" test, a non-Singaporean fund manager seeding his own fund that he manages out of Singapore would constitute 'Singapore-sourced' money in this test. Clearly, one year may not be sufficient, and extending the "80/20" rule holiday for perhaps up to three years would help new start-ups to get going. On a more aggressive note, removing the "80/20" rule altogether would be a big booster, and it may change the nature of how the funds are invested. With a sizable number of individuals in Singapore who meet the "accredited investor" criteria, relaxing the rule would allow those individuals to bring their investible dollars onshore into Singapore, and thus encourage more hedge funds to be set up. At present, many of these individuals invest into funds abroad due to the limitations described above.

Encouraging prime brokers to set up in Singapore would also be a key contributing factor in growing the hedge fund industry locally. Prime brokers provide many services for a hedge fund such as brokerage, stock lending, margin financing, custody and more. As the majority of prime brokers used by Singapore-managed hedge funds are currently located in Hong Kong, local hedge funds need to go through Hong Kong to get the service they require. Certainly, more can be done to entice the prime brokers to move their core operations to Singapore, thereby creating more critical mass for funds to operate and be managed out of Singapore.

Globally, hedge funds have begun to define themselves as an asset class that merits allocations even from the perceivably conservative investors, such as corporates and pension funds. In addition, allocations to hedge funds no longer stream solely from the high net worth individuals and funds of hedge funds. Indeed, these have become a global phenomenon:

As more statutory boards, government, institutional, pension and corporates allocate a percentage of assets to hedge funds, these will certainly boost the local hedge fund industry.

Overall, Singapore-based hedge fund managers have their part to play as well. As a result of the low AUM and thus low management/performance fees, local players have yet to meet the level of corporate governance and responsibility that has become a norm for their European and American counterparts. First and foremost, Singapore-based hedge funds need to build up credibility and investor confidence in their in-house risk management and control environment through emphasis on segregation of duties, independent directors' involvement, compliance responsibilities, portfolio risk management and more. Demonstrating their good corporate governance and transparency will elicit greater confidence by potential investors in them as a respectable asset class. The size of operations is, of course, a key consideration which may see more hedge funds merging or consolidating to build sufficient scale to meet these needs.

While Singapore hedge funds have managed to increase their average AUM since the previous year, there is still significant room for improvement before they are able to catch up with their peers in Hong Kong and Japan. These managers must start to look into taking a more pro-active role in promoting their product and themselves, or risk being in the low-AUM doldrums for a longer period of time despite good performance.