North American hedge funds witnessed another year of strong growth in 2011, despite a flat to slightly negative performance amid unhelpful market conditions. The Eurekahedge North American Hedge Fund Index registered a -1.13% return for the year, however the industry attracted US$55 billion in net positive asset flows from investors.

Since the turn of the millennium, North American hedge funds have witnessed some significant trends. At the start of 2000 the industry held US$258 billion in assets managed by 1,815 managers. Over the next eight and a half years, the sector grew exponentially with assets under management (AuM) peaking in June 2008 at US$1247 billion – an increase of nearly 500%. The fund population also increased significantly to cross 4,600 funds over the same period. The industry saw its asset base reduce drastically during the global financial crisis, losing nearly 32% of assets between June 2008 and April 2009. Additionally, a large number of hedge funds closed down during this time and the number of funds fell to 4,453 funds by end-June 2009. 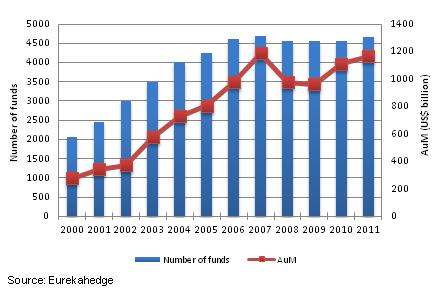 The size of the region’s hedge fund industry bottomed out in April 2009, with assets falling below US$850 billion, however ...