In this article, we try to show that the horizon of a fund's trades has profound implications on the difficulties encountered in assessing performance, on the characteristics of performance itself, especially in times of crisis, and on the diversification achieved by forming portfolios of funds.

Statistical analysis of the performance of an investment requires a representative history of returns. In the best case of a stationary process, accurate measurement of expected returns requires a very long time series. The debate on the appropriate equity risk premium intensifies periodically, frequently as a consequence of large moves. To put things in perspective, a century's worth of data is only an indicator of future returns. The graph shows the remarkable volatility of the excess return on a well-diversified portfolio: the 10-year rolling average of US equity market returns from 1871 to today. Historians would argue that the 20th century was quite positive economically and financially, hence it is not a guarantee for the future. Or alternatively an acre of land in central Rome was a very good investment until the barbarian invasion unfolded. Hence we should be wary of a hedge fund's ability to generate alpha even if it has a good 10-year track record. 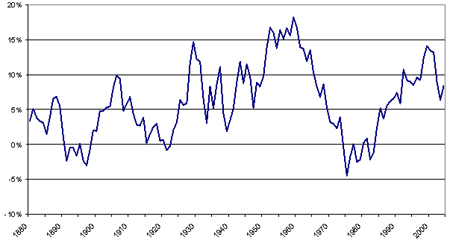 While statistical inference of expected returns has very stringent data requirements, other characteristics of the distribution can be easier to study. In terms of measuring higher moments of the distribution, eg the volatility of returns, skewness or the frequency of tail events, the length of the time series is less important than the number of observations it encompasses. For example, the 1-year history of a relative value fund focusing on trades with horizons of six months to one year may actually contain only a couple of sets of non-overlapping trades. Conversely, if the trades have a 1-day horizon, one year of data covers at least 250 trading periods. In the latter case, the realised performance can be accurately measured statistically, and the remaining question faced by investors is whether future performance is likely to differ from the year of observed returns history.

In the case of longer horizon trades, statistics such as Sharpe, Omega or Sortino ratios are obviously of little help. The short-term horizon fund not only has a better statistical history but going forward the evolution of returns is more informative in the sense that it is easier to determine that conditions have changed over a month (20 trades completed), than it is for the longer horizon fund. Indeed, in the latter case it is difficult for the manager himself to assess what the distribution of returns will be on the basis of so few observations, let alone for the investor. Investors face the additional difficulty of distinguishing between skill and luck and are faced with a form of survivorship bias. In the simplest case, the 1-year performance is based on two bets. If enough different managers make such bets, some will necessarily be on the right side of the bets and generate superior performance. The bias is that managers with mediocre performance will not receive much publicity and fall by the wayside. The smaller the number of bets, the stronger is this form of survivorship bias. In order to evaluate past performance and/or predict future returns, there is no substitute to the conceptual understanding of the actual trades.

A strategy which relies on long-term trends does not require frequent trading and can afford to be implemented over time. Consequently, it is compatible with low liquidity and can be done in sizes such that the liquidity of the positions becomes limited and the transactions costs to exit large. The longer horizon fund will therefore most likely be always invested and will not be able to cut losses cheaply or quickly. Furthermore, it is likely that an adverse move in a longer term trend actually increases the expected return of the strategy from that point on. Hence not only is the fund like an oil tanker, ie very slow at changing course, it also may be optimal, from an expected return standpoint, to accelerate on the same course. These characteristics – low frequency, illiquidity and costly exiting of large positions – apply better to some strategies such as fixed income relative value, distress or credit trades. Macro bets and trend-following strategies, by contrast, can sometimes be implemented in size with highly liquid securities.

Conversely, a short-term horizon strategy requires low transaction costs and highly liquid positions. If it relies on mean-reversion such trend is necessarily short-lived and, by definition, liquidation of the strategy on the grounds of expected return becomes a matter of indifference after a short period of time. A pre-committed stop-loss constraint is therefore much cheaper and also more likely to be adhered to by a fund using short-term strategies. This truncation of the returns leads to fund return volatility increasing less with market volatility than in the other case. The table below summarises the characteristics generally associated with long- and short-term horizon strategies.

In the hedge fund arena, a key concern is the impact of crises on returns. By definition they are rare, hence past returns may not encompass such occurrences. Some crises are caused or at least substantially magnified by hedge fund and proprietary trading strategies themselves. Such endogeneity has always been present but it has become more acute recently with the increase in the amounts invested and the widespread adoption of VaR risk management systems. Indiscriminate liquidations in large portfolios which may be similar induce increased correlations among otherwise uncorrelated strategies. Hence when the crisis hits a part of the portfolio, the other strategy compartments may be affected by liquidations creating a self-reinforcing mechanism. This mechanism does not depend on the size of a single actor relative to the size of the market; it simply requires that their aggregate size is large relative to market liquidity.

Here again, our two types of funds are likely to react very differently to crises.

For the longer horizon fund, the issue is how long the fund is able to withstand a worsening of the crisis before liquidity returns, other investors identify the opportunity and the underlying bets pay off.

Once a crisis hits, the short horizon fund has a strong incentive to cut losses to reduce risk and faces low costs of doing so. Such a fund is not necessarily always invested, in fact it should selectively choose the times it enters the market so as to maximise the probability of gain. Hence, the fund may not be invested at the time the crisis hits either because of luck or because the increase in risk had been anticipated. By the same token, the fund is able to swiftly take advantage of the opportunities the crisis created in a way a fully-invested low liquidity fund is unable to match.

The pitfalls of using statistics based on data containing a small number of actual observations compound when constructing portfolios of hedge funds. The statistics for some individual funds have little significance, but estimates of historical correlations are even less significant. Contagion leads to a decrease or disappearance of diversification in times of crises. What is there to do? Common sense suggests a return to square one: formulate simple return scenarios and make assumptions on correlations, especially in more volatile times. A good starting point may be to think of maximum losses for individual trades in states of nature where correlations are high. To that end, a careful analysis of stated stop-loss constraints and of the costs and incentives faced by managers to abide by them deserves special intention. An implication of the above discussion is that varying the trade horizon across the components of the portfolio and mixing mean reverting and trend following strategies can substantially enhance diversification effects across the whole spectrum of market conditions.

The relevance of these simple points is reinforced by the recent trend towards investments in less liquid instruments (ie credit derivatives, catastrophe bonds, private equity, etc) and the associated lengthening of trade horizons.