Hedge funds had a flat to negative month this June, being negatively impacted by wide swings – such as notable declines in equities and a sharp surge in commodity prices – in the underlying markets; the Eurekahedge Hedge Fund Index shed 0.5%1 on the month. In terms of assets, the industry lost US$2.3 billion owing to negative performance, but saw an increase of a healthy US$6 billion from fresh inflows. The net US$3.7 billion increase in assets brings the AuM for the entire hedge fund industry to US$1.7 trillion as at the end of June.

The chart below shows the monthly performance-based changes in AuM and net asset flows (inflow/redemptions), in 2008. 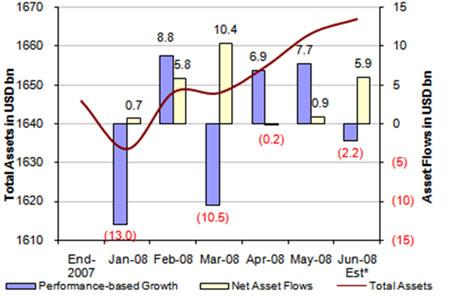 Most of the month’s gains came from CTAs, who benefited from their exposure to commodities, as crude oil made yet another record high (breaching the US$140/barrel mark); some grains and softs saw double-digit percentage gains and precious metals such as gold and silver were up close to 4% each. Although long/short equity managers recorded losses, mainly as a result of long exposure to equities, shorts across the asset class fetched some gains for long/short, macro and multi-strategy managers during the month. Furthermore, some currency trades – shorting US dollar and the yen against the euro – proved rewarding for some CTA, macro and multi-strategy managers, during the month.

These movements, some of which were similar to those seen in the last month, go a long way in explaining new subscriptions of over US$2 billion each, in CTAs and multi-strategy hedge funds, while macro managers saw fresh inflow amounting to US$540 million. In terms of performance-based increase in assets, CTAs and macro managers saw the most increase – each close to US$800 million – while multi-strategy managers remained relatively flat. Strategy-wise performance growth and net asset flows during June are illustrated in Figure 3.

In terms of regional mandates, all regions saw a performance-based decline in assets, as June on the whole proved to be a difficult month as far as trading went. Asia ex-Japan, not surprisingly, saw the biggest decline of close to US$1.5 billion in the course of the month, most of which can be attributed to long exposure of managers to regional equities.

North America saw a performance-based decline in AuM of nearly US$600 million, as gains from commodity and currency trades were wiped out by losses from equities, as the S&P 500 fell 8.6% over the month. However, the region witnessed inflows to the tune of US$3 billion, from new subscriptions. A large portion of this inflow can be explained by the region’s relative outperformance, as compared to other (especially, developed) regions over recent months. Asia-ex-Japan’s inflow of over US$1 billion can partly be ascribed to the extremely low valuations (compared to those seen in recent years) across the regional, oversold equity markets, which make the region relatively attractive, at this point in time. Japan, which has posted the least losses in Asia, for the year-to-date, saw an inflow of US$490 million in June, while Europe and Latin America, which were flat in terms of performance-based change in assets, saw net inflows of close to US$670 million each. 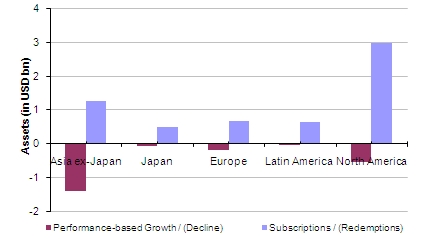 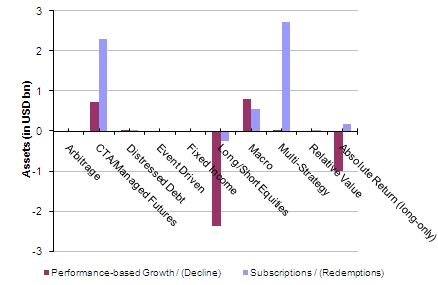 In conclusion, hedge funds had a flat to negative month in June despite notable drawdowns across global equities, with a sharp surge in commodity prices and heightened inflationary pressures weighing the underlying markets down. Coming into July, markets continue to trade in a fashion similar to last month’s. Equities continue to remain volatile and negative for the month-to-date; while in the commodity markets, a number of commodities are still trading at prices close to their respective record highs.

We continue to remain fairly optimistic, in terms of hedge fund performance, as the present state of the markets is likely to afford managers with profitable return-generating opportunities over the near- to medium-term. The already-oversold equity markets, being characterised by quite a bit of volatility, only seem to be sliding further down; while crude oil prices are likely to rise further (given renewed tensions in the middle east, coupled with reports on declining inventories). Such market conditions are likely to provide long/short managers, arbitrageurs and CTAs with healthy opportunities in the coming months. Good (or at least, relatively good) returns, in turn, could translate into some healthy inflows into the hedge fund industry. Furthermore, the 2Q2008 earnings reporting season that is just around the corner, will play an important part in shaping investor sentiment over the coming quarter; results in line with expectations could largely boost investor sentiment, and bring about rallies (presumably, short-lived ones) in the underlying markets. We also expect this to play a vital role in determining fresh flows into hedge funds, over the next month or two.