After a very strong 2007, hedge funds faced a challenging year in 2008 (particularly the latter half) in the face of high volatility, collapsing banks, drying up liquidity, heightened investor risk aversion and severe redemption pressures. Against this backdrop, hedge funds had their worst year on record with the Eurekahedge Hedge Fund Index ending the year down 12.5%1.

The tumultuous year witnessed the industry shrinking to 8,471 funds, managing US$1.49 trillion in assets as at end-2008, down from 8,642 hedge funds with assets under management (AuM) of US$1.89 trillion as at end-2007. Interestingly, the number of funds fell by a mere 2% in contrast to an over 20% fall in assets. This difference can be explained by both losses suffered by managers, as well as significant redemptions across the board with strategies like long/short equities seeing net outflows of 20%; net redemptions across the industry amounted to US$200 billion throughout the year. Despite this notable decline, the industry still stands 50% stronger than it was five years ago, in terms of the number of funds, with a two-fold increase in assets. 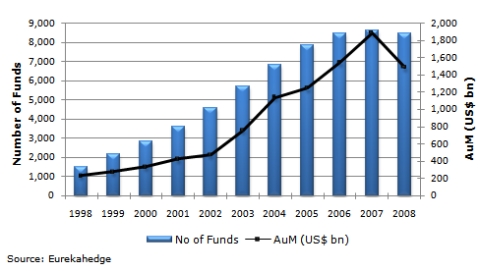 To sum up, the hedge fund industry saw well over 5002 fund closures through 2008 amidst a vicious cycle of risk aversion leading to redemptions, which in turn led to forced selling, causing further losses and hence further redemptions. Additionally, other factors like increased margin calls by prime brokers and counterparty exposure to distressed investment banks, also led to some forced selling and hence losses, particularly through the latter half of the year.

On a positive note, hedge funds largely outperformed the underlying markets. While the MSCI World Index lost over 40% through the year and the Reuters CRB Index was off nearly 40% from its mid-year high, the average hedge fund shed a mere 13% through 2008. The industry also witnessed over 3803 new fund launches during the year, confirming the demand for hedge funds and absolute returns.

2Actual number of fund closures confirmed with Eurekahedge up to February 2009.

3Actual number of newly launched funds listed in the Eurekahedge databases as at February 2009.