The Asian hedge fund space, which includes funds that are either based in Asia or investing in Asia, has been one of the fastest growing sectors in the global hedge fund industry since 2000, both in terms of assets and number of funds. However, the industry has also gone through difficult periods and diverse phases. After witnessing tremendous growth in the first eight years of the decade, Asian hedge funds went through a lean period in 2008 and early 2009 amid the global financial downturn and widespread redemptions. However, the industry rebounded in 2H2009, posting excellent returns and attracting more capital – the Eurekahedge Asian Hedge Fund Index was up 26.79% in 2009, the strongest yearly return on record for the index. 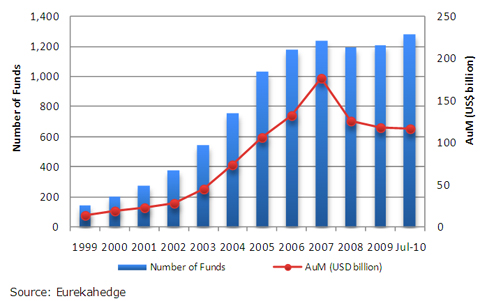 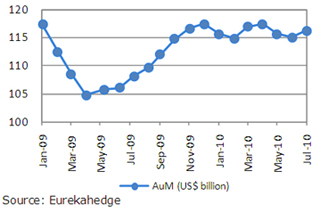 After posting some spectacular results in 2009, Asian hedge funds have witnessed mixed returns and subdued subscriptions in the first seven months of 20101. While the last year ended on a high note with excellent performance and strong asset flows, a spike in risk aversion and volatility in global markets during the first half of 2010 translated into marginally negative performance (July YTD) and weak asset flows. As of July 2010, the size of the Asian hedge fund industry stands at…

1 While we have not included August numbers in the research, our most recent data shows asset flows to be negligible – which is often the case for August.