The European hedge fund industry grew at a rapid pace in the first seven years of the last decade, with assets increasing 12-fold to reach US$464.30 billion at the end of 2007. Over the same period of time, the total number of hedge funds in the region increased six times to cross the 3,000 mark. However, as the global economy went into recession in 2008, European hedge funds went through their worst year on record, suffering heavy losses and witnessing unprecedented redemption pressure. This trend continued into the first few months of 2009, with industry assets reaching a trough of US$293.60 billion in March 2009, falling below the US$300 billion mark for the first time since 2005.

Figure 1a shows the growth in European hedge funds since 2000 while Figure 1b displays the movement in industry assets since June 2009. 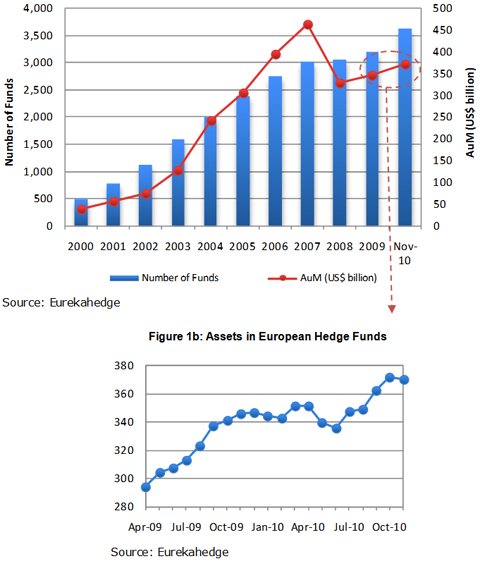 Between April and December 2009, the industry posted a remarkable recovery, with managers posting healthy gains and attracting significant capital in the last eight months of the year. The Eurekahedge European Hedge Fund Index posted its highest annual return on record in 2009, gaining 20.25% and the region's hedge funds finished the year with assets under management standing at US$346.53 billion.

The fortunes of European hedge funds in 2010, however, has been mixed, with managers posting some healthy returns and offering downside protection...