Hedge funds were up for the seventh consecutive month in January, posting a marginal result of 0.06%1  for the month. Price movements in global markets were erratic in a month marked by various themes including improving economic fundaments in the US, political instability in the Middle East and rising inflationary pressure. The MSCI World Index was up 1.87% in January.

Japanese hedge funds delivered the best performance among the main hedge fund regions, gaining 1.26% in January. Managers leveraged on the better-than-expected earnings, corporate activity and a strong yen to outperform the Nikkei 225, which was up 0.09% during the month. Returns from other developed economies were also positive, with the Eurekahedge North American Hedge Fund Index gaining 0.75% while European hedge funds were up 0.24%. Stronger outlook on the US economy, as well as easing concerns on the European debt situation, drove up the regional markets – the S&P 500 climbed 2.26% while the MSCI Europe Index gained 1.83% during the month. 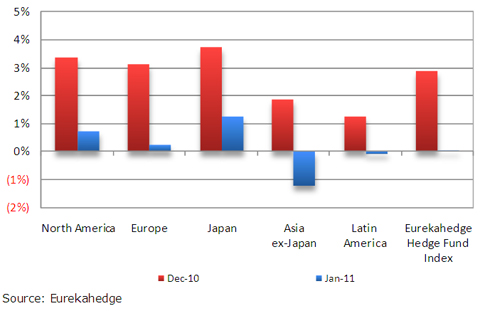 The relatively modest returns across the regions came after a period of strong performance by hedge funds at the end of 2010. The Eurekahedge Hedge Fund Index was up...