Asian hedge funds have witnessed tough times since 2008 and have faced numerous challenges over the last two to three years. The industry saw tremendous growth between 2000 and 2007, with the number of funds increasing eight-fold and total assets under management (AUM) growing by nearly 800%. By end-2007 the size of the Asian hedge fund industry stood at US$176 billion managed by 1200 managers.

With the onset of the global financial crisis managers faced heavy losses, while also witnessing significant redemptions from investors. The Eurekahedge Asian Hedge Fund Index declined by 20.54% in 2008 and by April 2009 the AUM declined to US$104.8 billion. The industry bounced back after April 2009 with managers posting excellent performance-based returns and also attracting some asset flows. Despite this,  growth post-financial crisis has been slow and yet to match what was seen in the industry in the years before 2008. 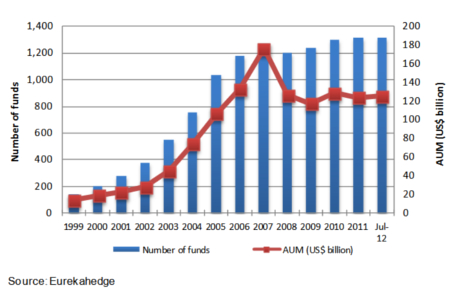