With a bleak macroeconomic outlook, the often discussed theme is immigration policy in Japan. Immigration looks to be a compelling measure to tackle the Japanese issue of an ageing and declining population. This may seem like a far off, long term problem, but it may be more acute than people think when you consider the fact that the average age of a car buyer at Nissan Motor is 62 years old. Immigration policy is a well discussed theme, but I’d like to take a closer look.

The AFP reported that the Japanese government approved only 27 refugees among 7,586 applicants in 2015. The Ministry of Justice argued that the number of approved refugees have increased from 11 in 2014 and 6 in 2013, but this 0.36% approval rate doesn’t seem reasonable. Given the statistics, you may wonder how restrictive the immigration laws are in Japan. The truth is that there are no immigration laws. It can be argued that we have the Nationality Act and the Refugee Recognition Act under the jurisdiction of the Ministry of Justice. We also have the Immigration Control Law under the jurisdiction of the Ministry of Internal Affairs and Communications. But this is nothing more than a patchwork of laws passed to deal with urgent, ad-hoc needs in the past. There is no concept or strategy of how the government wants to deal with immigrants. This is the reality in Japan, an island surrounded by deep seas and a long history of insular monoculturalism.

TMost developed countries have experienced large waves of immigration during their periods of rapid growth. For better or worse, when Japan went through its high growth period in the 60’s and 70’s, there was a redundant farmer population of over 10,000,000; this was enough to satisfy growing labour demand in urban areas. This is one major reason why Japan was able to avoid a real discussion about immigration in the past. Many politicians still argue that immigration is too sensitive a topic for Japanese people. It is true that Minister Ishiba’s comment had a strong response from the public when he said on TV that he believed Japan needs to start a discussion about creating an Immigration Law in January this year. But, wait a minute. My experience in Japan tells a different story:

The United Nations (1998) defines a long-term migrant as a person who moves to a country other than his or her usual residence for a period of at least a year. We may not have explicit rules for accepting immigrants in Japan, but the truth is that the number of immigrants or foreign workers in Japan have been increasing at a fairly high pace.

Number of Foreign Workers in Japan (in thousands) 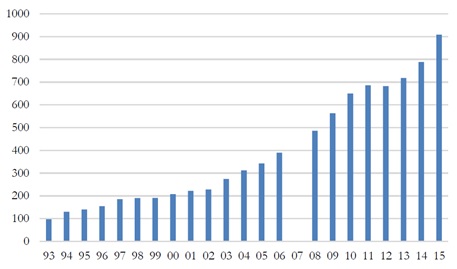 Also, the government is now targeting an increase in the number of foreign workers by 200,000 per year. In 2015, we had 908,000 immigrant workers in Japan. This will likely exceed a million in 2016 with over two million immigrants living in Japan. This is about 1.5% of the total labour population (we have 66 million workers and a total population of 127 million) and this figure doesn’t include illegal foreign workers/residents. Consequently, the government is expecting a 0.3% increase in the labour population every year through immigration. Given that we are expecting the total population to decline 5% in the next ten years, the recent trend in increasing immigration can help offset this.

Without an immigrant law, how can Japan have this many immigrants working legally? The Japanese government actually started allowing companies to hire foreign employees in the 70’s. At the time, Japanese companies were trying to expand their operations to overseas markets, but had a difficult time finding enough skilled local workers in new markets. To tackle this issue, the Japanese government allowed export-oriented manufacturing companies to train foreign workers in Japan. The plan was to train foreign workers in Japanese factories first, then send them back to new factories mostly in Asia as initial key local employees.

With continuing cost cutting pressure from customers and young Japanese people not wanting to work in factories, it is not difficult to imagine the appeal of hiring humble young Asian workers. In 1990, the government loosened their policy on training foreign workers. They allowed even domestic manufacturing companies to ‘train’ foreign workers. Politicians can be very flexible at times; in 1993 they started allowing foreign workers to “practice” their ‘trained’ skills for an extended period of up to three years. In 2014, the government extended this again to six years.

Trainees from Asian countries were definitely not enough. In 1988, the Japanese government started to allow second and third generation Japanese families living overseas to visit their relatives in Japan and stay. Perhaps intentionally, the government didn’t restrict them from working during their stay. This rule has been exploited by many Japanese companies and as a result, we see many immigrants, especially Brazilians, who are second or third generation emigrants. They are also allowed to bring their families to live and work in Japan. In an extreme case, 15% of the population of Ohizumi City in Gunma Prefecture, where Subaru and Sanyo (now Panasonic) have factories, are immigrants.

Number of International Students in Japan (in thousands) 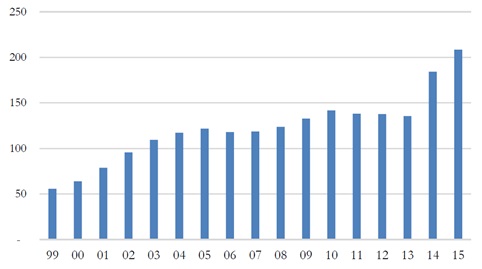 We will probably see more public discussion about immigration policy in Japan in the coming years, though the truth is we have already started having a fairly large number of immigrants in Japan. In the past, when countries had strong demand for immigrants, they tended to get them. Even in a traditional and closed society such as sumo wrestling, which is an official Japanese national sport, 30% of top league (Makuuchi) wrestlers are non-Japanese. I am personally optimistic that Japan can adjust its mind-set towards pro-immigration. Societies and communities need to adapt to changing times.

Lastly, I would like to introduce an encouraging story. Ohta city in Gunma Prefecture has a population of 220,000. The city has thrived with Subaru which historically has had many factories there. They have accepted immigrant workers for a long time and the population is still growing, which is rare for a city outside of Tokyo. When factories started hiring immigrants, local schools were not ready for non-Japanese speaking students. The mainly Brazilian boys and girls couldn’t understand much Japanese and didn’t have much of a chance of catching up to their local peers. Many of them, especially middle school students, ended up dropping out of school. Among all immigrant students, only 50% of middle school graduates were able to proceed to the local high school in 2002. Facing this issue, several important measures were implemented.

Schools prepared a guide book for non-native students and their families. They had training sessions for teachers to help them work with immigrant students. They also introduced bilingual teachers at school and provided introductory Japanese lessons. Local communities also started after-school programs for immigrant students to study Japanese and other school subjects. All of this has resulted in 90% of middle school graduates now going to the local high schools in 2013. The Ohta City government website can be read in five languages including Portuguese, Spanish, Chinese and English in addition to Japanese. With appropriate support from the community and society, I see a positive future of Japan accepting more immigrants.1

Tomoyuki Izumi, founded VIS Advisors, LP and Takumi Capital Management Fund Ltd in 2014. He began his investment career at Equinox Partners in New York in 2008, where he covered Japan and other north Asian countries including China, Korea and Taiwan. Prior to joining Equinox Partners, Tomoyuki spent nine years as a management consultant at Accenture and Roland Berger in Tokyo. He ultimately specialised in growth strategy and M&A strategy. Tomoyuki holds a BA in Business from Hitotsubashi University and an MBA from Columbia Business School.