In 2000, the European hedge fund industry space had 470 funds managing a total of US$38.6 billion in AUM. Over the course of the next seven years, the industry saw tremendous growth with AUM peaking at US$472.8 billion by October-2007. The onset of the global financial crisis, which was followed by the sovereign debt crisis in the Eurozone periphery, dealt a serious blow to the industry with managers seeing large redemptions and heavy performance-based losses. The Eurekahedge European Hedge Fund Index was down 17.2% in 2008 with AUM declining by 37.9% from their 2007 peak to bottom-out at US$293.6 billion by March 2009. Since then, the industry has shown increased resilience despite the Eurozone crisis being a recurrent theme, and AUM has increased by 57.3% from their 2009 low to end at US$461.7 billion by February 2014. 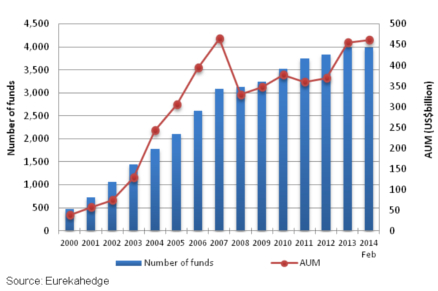 The creation of the European Financial Stability Facility (EFSF) in May 2010 delivered some relief to the markets as prospects of a Eurozone wide sovereign default eclipsed – with the Eurekahedge European Hedge Fund Index climbing 9.17% during the year. By April 2011, the AUM of the industry had increased to US$416.5 billion only to be checked by a resurgence of debt woes as the crisis intensified amid fears over Greece exiting the Euro, driving the industry’s AUM back down to a low of US$396.3 billion in August 2011.

1Estimates as at February 2014