Hedge funds have been in negative territory for three out of four months this year, losing an additional 0.13%1 in April following the losses from March. They are still up 0.78% for the year, slightly beating the MSCI World Index2 which gained 0.75% during the same period. The two largest central banks in the world jittered global markets as they deliberated on monetary policy. In April, the Fed meeting clarified that with inflation still low and sluggish growth in the US, it would be a considerable period of time before the first interest rate hike, even while asset purchases continued to taper. Similarly, the European Central Bank reaffirmed its commitment to combat deflation and unemployment in the Eurozone, stating that it would consider easing monetary policy if necessary. Over in Ukraine, tensions have re-escalated despite the Geneva agreement reached on April 17 which was seen as a major step towards regional peace. While political instability and threat of further sanctions continue to weigh over assets in the region, market sentiment elsewhere remains largely unmoved by the crisis. 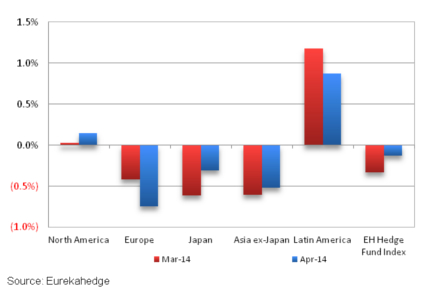 Latin American funds were the best performers during the month with gains of 0.87%. North American managers were the only other regional mandate in positive territory, returning 0.15%. US markets were largely flat to marginally up, with the exception of the tech heavy NASDAQ index which suffered from a sell-off in the tech sector and fell 2.01%. Funds investing in Europe lost 0.74%, while those investing in Asia ex-Japan lost 0.52%. Funds focused on Japan lost 0.31%, outperforming underlying markets as the Nikkei 225 fell 3.53% in April. The Japanese yen rose in April as CPI figures rose past the Bank of Japan’s inflation target, causing the market to expect monetary policy to tighten.