As hedge funds bounced back in February across the board, with most strategies recovering most or all of January’s lost ground (the composite Eurekahedge Hedge Fund Index advanced an impressive 2.9%), data of February 2008 assets under management (AuM) from early reporting funds to the Eurekahedge databases suggests that hedge funds globally raised their total assets to the tune of US$5 billion in performance-based growth, and another US$1.5 billion in net investor inflows. This translates to an estimated 0.4% rise in global hedge fund assets, to US$1.64 trillion . Asset flows during the past two months are summarised in Figure 1 below.

Figure 1: Summary of Monthly Asset Flow Data for 2008 till to date 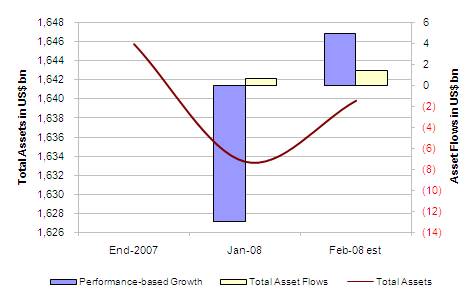 In terms of regional hedge fund mandates, North American and Emerging Asian funds saw the biggest performance-based gains in assets. The respective Eurekahedge regional performance indices were both up 1.7% each; the former benefited from impressive returns in regional CTA managers, while the latter saw notable gains in regional equity markets. European (1.4%) and Japanese (1.2%) managers were at the lower end of the spectrum, as is evident from Figure 2. Funds allocating to North America and Emerging Asia also appear to have seen net inflows during February, attracted by the volatility-fuelled under valuation/mis-pricing in the regions’ assets. 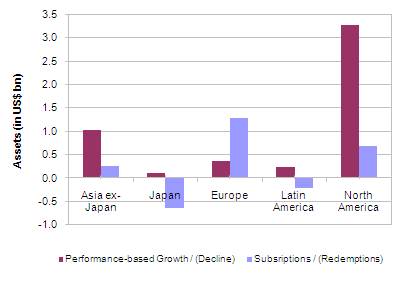 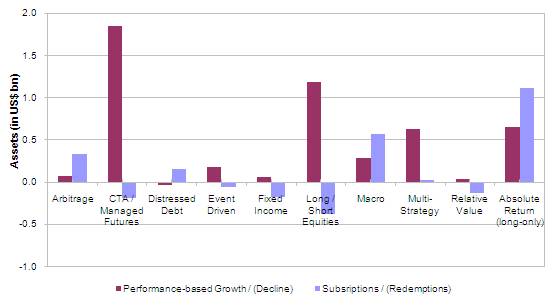 Asset flows across strategies were less mixed, and are depicted in Figure 3 above. CTAs as well as equity-focused strategies, both in the hedged and the long-only spaces, understandably saw the biggest performance-based gains during the month. Bullish trends in the commodity markets saw the Reuters-CRB commodity index return a whopping 12.4% on the month, while the MSCI World Index finished a volatile month nearly flat at -0.7%.

After sharp declines in equity prices in recent months as a product of persisting uncertainty in the underlying markets (given tightening credit conditions, a slowing US economy, mounting recessionary fears, ongoing housing/subprime woes and shrinking liquidity despite aggressive rate cuts from the Federal Reserve), February saw managers uncovering profitable opportunities in a volatile trading environment. Funds were also able to profit from weakening trends in the US dollar against most major currencies (2.1% and 2.4% against the euro and the yen respectively).

Going into March, the markets continue to be characterised by volatility, with many major markets often exhibiting daily movements of about (or even in excess of) 1%. The continued downward trend in the US dollar coupled with a higher-than-expected rise in inflation and other negative economic data emanating from the US (such as poor jobs numbers and further declines in home prices, for instance) have also been weighing on the markets, resulting in heightened concerns about the possibility of a recession in the US. Furthermore, financial company stocks are under added pressure given recent big-name news such as JPMorgan Chase’s buyout of Bear Stearns at a deep discount, and Carlyle Group’s liquidation of its mortgage bond fund, as also given earnings expectations for 1Q2008. Given these market developments, we expect a rise in asset flows into hedge funds in the coming months, as investors look to better risk-adjusted returns in rough trading conditions.

1 These are preliminary estimates based on about 60% of Feb 2008 AuM data reported to the Eurekahedge databases as at 18 Mar 2008.