Hedge fund managers saw net inflows of US$66 billion, during the first half of 2008, bringing their assets under management (AuM) to a solid US$1.95 trillion as at June 2008. These inflows were evident despite harsh movements in the underlying markets, as commodity prices soared (the Reuters CRB Index rose 25%) and equities fell dramatically (the MSCI World Index shed 11.8%) during the period. Furthermore, the slowing of economic growth coupled with rising inflationary concerns negatively impacted investor sentiment, thereby taking a toil on underlying markets. Managers, however, did a good job of protecting capital during the period, as the Eurekahedge Hedge Fund Index remained flat (0.1%).

This report aims to examine asset flows seen across the hedge fund industry during the first half of 2008, highlighting key trends in asset re-allocation, seen as an outcome of movements in the underlying markets. 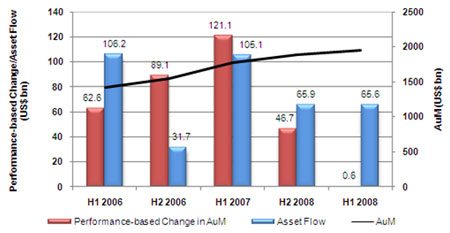 Hedge fund assets increased by US$65 billion, during the first six months of this year, with most of the increase coming from fresh inflow of capital (US$66 billion). Contrary to common belief, the performance-based change in assets also remained positive (albeit marginally at US$582 million). However, turbulence across the underlying markets, which led to losses and redemption pressures for some managers, translated into a significant amount of liquidation across the hedge fund space. H1 2008 saw an inflow of US$3.3 billion coming from new launches, while liquidations seen during the period accounted for an outflow of US$4.5 billion.

Funds of hedge funds also saw a decent increase in their AuM which shot up from US$747 billion as at end 2007 to US$783 billion by the end of June 2008. Managers saw an increase in both performance-based changes in assets (US$22 billion) as well as new inflows (US$13 billion). Funds of hedge funds, in contrast with hedge funds, saw more new launches (US$2.1 billion) than liquidations (US$1.8 billion), during the period under consideration. 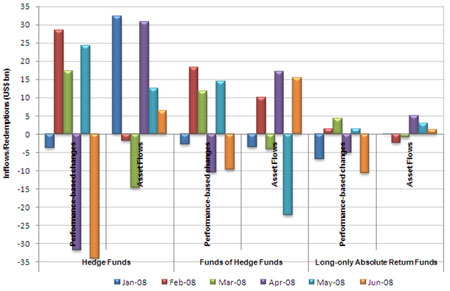 While both hedge funds and funds of hedge funds saw a decent increase in assets through the first six months of this year, their long-only counterparts were faced with notable losses, largely owing to the plunge in equities across the board. The assets parked in long-only funds declined from US$132 billion as at December 2007 to US$123 billion six months later, as losses of over US$15 billion were partly offset by new inflows of US$6 billion. These inflows – in spite of negative returns (the Eurekahedge Long-only Absolute Return Index fell 13.5% in H1 2008) – suggest that investors prefer to park their assets in actively managed absolute return vehicles, rather than investing in passively managed mutual funds or other conventional asset managers. Also, inflows into long-only absolute return managers go some way in explaining investors’ keenness to take advantage of the unreasonably low valuations across some equity markets.

Of the US$66 billion of net inflows that the hedge fund industry saw in the first half of 2008, a considerable portion was seen going into broader mandates, as opposed to single country-focused hedge funds. To some extent, this explains the strong inflows of nearly US$52 billion in North America, as global funds tend to have significant exposure to the region. Likewise, Europe saw a net positive flow of close to US$5 billion, during the period, despite pure Europe-investing funds facing net redemptions. An increase in risk aversion among investors during the recent past has also gone some way in bringing about a shift in assets from riskier emerging markets to relatively safer developed markets. 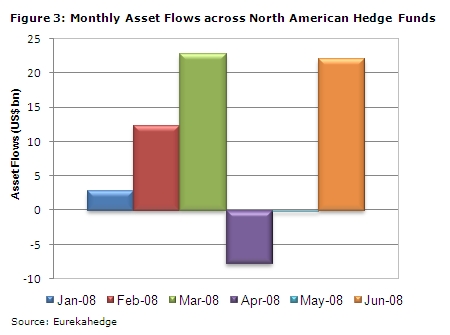 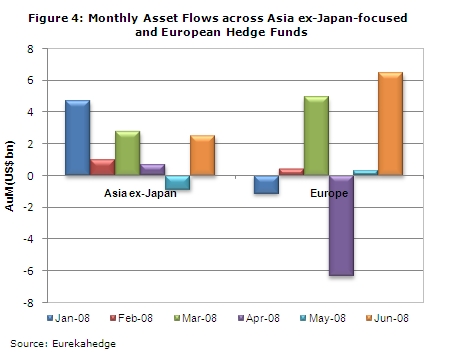 As global mandated funds allocate largely to the US and to some extent to Europe, emerging market funds tend to have a relatively large exposure to major Asian emerging markets – such as China and India, among others. This partly explains a net inflow of about US$10 billion seen in Asia ex-Japan. Broader regional mandates within Asia, such as Asia ex-Japan and Asia inc Japan, drew decent inflows (close to US$11 billion); some of which were negated by outflows (nearly US$1 billion) seen in single-country focused managers – such as those allocating to Japan, China and India, among other countries. This further reiterates the point that assets are moving away from single country-focused mandates to broader regional mandates.

Latin America remained relatively flat, in terms of asset flows (net inflow of US$73 million), as the mandate by itself saw more redemptions than subscriptions. Emerging market allocations to the region more than offset the outflows seen by pure Latin America-focused managers. Since Latin American markets are largely influenced by commodity prices, the outflows from Latin America-mandated funds (many of which are onshore) lead us to believe that domestic investors have been wary of investing within the region, as domestic markets could take a hit if commodity prices fall.

Japan was the only region to have witnessed net outflows (US$1.9 billion) during the first half of 2008, as investors re-allocated (or diversified, mainly into broader mandates – Global/Asia inc Japan) their portfolios as a measure of risk reduction. 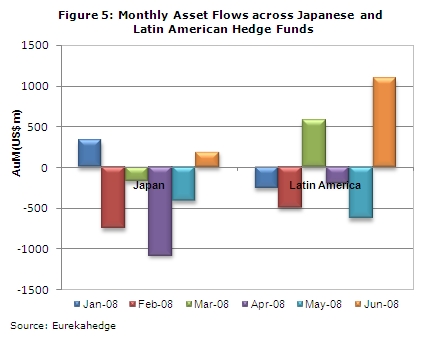 In terms of strategic mandates, CTAs, not surprisingly, saw the most inflows (US$24 billion) between January and June 2008, while long/short equities witnessed the largest outflows (over US$12 billion). This clearly reflects a shift of assets from equities to commodities, during the period, as the former was expected to fall sharply, owing to stress across the global financial markets and a rising trend in investor risk aversion. On the other hand, a falling US dollar coupled with tensions across the Middle-East and occasional reports on falling inventories of crude oil, saw crude oil prices along with other commodities rallying strongly during the six months. 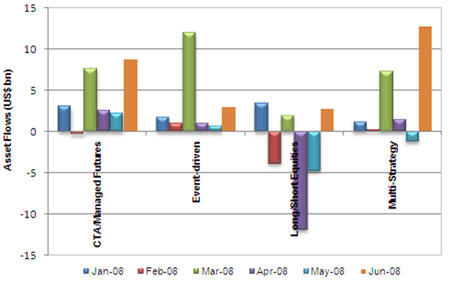 All other strategies saw positive net flows during the first half of the year, with some like arbitrage, distressed debt, fixed income, macro and relative value recording relatively subdued inflows of between US$1 billion and US$3 billion. This is largely so because most of these strategies require huge volumes in the underlying markets to perform well, and most of H1 2008 has seen thin trading volumes owing to the drying up of liquidity. However, net inflows into these strategies do suggest that they have been ideal options for investors with low risk appetites during recent times of volatility.

The only other strategies to have witnessed marked asset flows during the six-month period are multi-strategy (US$22 billion) and event-driven (US$19 billion). Strong flows in multi-strategy funds indicate investors’ desire for diversification (across asset classes) during times of volatility and uncertainty in the underlying markets. Notable inflows into event-driven managers can be partly explained by the weak (or in many cases, weakening) balance sheets of companies across the board, some of which make attractive targets for takeovers by large, cash-rich firms. Many such situations have afforded event-driven managers with lucrative opportunities during H1 2008. 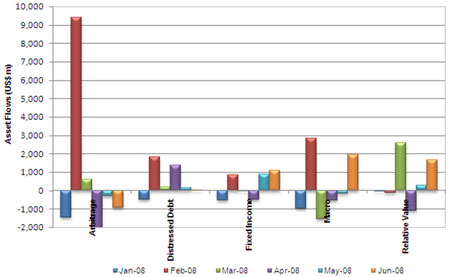 In terms of manager locations, those based in North America saw the largest inflows (close to US$50 billion) for this year-to-June, while those located in Asia saw net flows of US$13.5 billion. While the flows into North America-based managers look relatively attractive, it’s worth noting that these flows amounted to a mere 4.1% of their total end 2007 AuM. However, the percentage inflow of Asia-based managers stands at an impressive 8.8% over the period. This difference can be explained by the fact that North America has been impacted to a far greater extent by the global credit crisis and the economic slowdown than Asia. 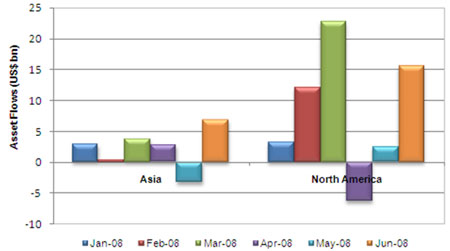 The credit crisis that originated from the meltdown of the US subprime mortgage markets also spilled over into Europe. The consequent negative impact on the region’s financial sector and evidence of slowing regional economic growth are reflected in the rather modest inflows (US$7.8 billion) seen into hedge funds based in Europe. These account for 2.2% of the 2.8% increase in the AuM of Europe-based funds (with the rest coming from appreciation of invested capital).

While the above stated manager locations saw positive flows, regions such as the Caribbean and Latin America were witness to redemptions over H1 2008. Outflows from Caribbean-based managers were marginal (US$540 million), which can partly be attributed to the global economic slowdown, the impact of which has been quite pronounced in the West. However, Latin America-based funds saw net redemptions (US$5 billion) over the six months. This suggests an increase in risk aversion among domestic investors, partly owing to the abnormally high crude prices in the recent past; a sharp decline in oil prices would negatively impact markets in the region. This highlights a noteworthy point – given the net inflow (albeit marginal) into Latin America-investing funds and net outflows from those based within the region – it tells us that inflows into offshore Latin America-investing funds have more than offset redemptions from domestic investors. This suggests that offshore investors continued to see value (or at least relative value) across Latin American markets during the period in question.

Figure 9: Monthly Asset Flows across Hedge Funds based in the Caribbean, Europe and Latin America 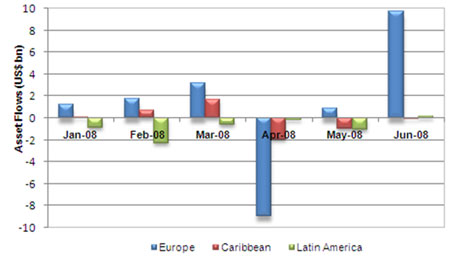 The first six months of this year have seen significant turbulence across the underlying markets. Several large financial firms reported either fresh or further write-downs resulting from their exposure to the US subprime markets. Such reports, coupled with surging commodity prices, tumbling equities, rising inflation and slowing of economic growth considerably affected investor sentiment across the board. Despite such factors, hedge funds have seen net inflows of US$65 billion during this year-to-June.

However, July marked a change in the course for currencies, commodities and equities, as the commodity markets fell considerably (on concerns of demand) and equities exhibited a marked and rather unanticipated upturn soon after. The US dollar also came off its weakening trend, and strengthened against the euro (by 1%) and the yen (1.6%), among some other major currencies. These factors significantly boosted investor sentiment, which we anticipate will translate into healthy fresh inflows into the hedge fund industry, in the second half of 2008.

We continue to remain optimistic about hedge fund performance, as we anticipate the near- to medium-term volatility across asset classes to translate into good opportunities for managers employing short-term trading. Furthermore, the upward trend in equities could indicate healthy gains for value-investing equity managers on the long side, while a further correction in commodities can mean decent opportunities in commodity-related stocks on the short side. The decline in the prices of commodities, many of which are still considered to be relatively overvalued, would also afford CTAs and directional macro strategies with lucrative opportunities on the short side.