The amount of capital being sought for high-return private equity real estate funds is at a record high. At the same time, many institutional investors are sidelined by the denominator effect or by a tactical decision to move slowly in an uncertain market that is awash in fund offerings.

In this environment, many quality managers are struggling to reach fund-raising targets, and several of them have offered to improve terms in an effort to gain a competitive advantage over the field (or remain competitive with the field).

For investors to take full advantage of this opportunity, and for investors to make informed relative decisions among different funds in any market, an understanding of the real impact of fund terms is critical. Some terms can have a surprisingly large impact. For example, shifting from an interim-carry waterfall (distributing carried interest as investments are realised) to a fully-pooled waterfall (with a back-ended carry) can have the same impact on net IRRs as shifting from a 20% carry to a 17% carry.

Both – when a fund achieves its targeted returns and when a fund fails to reach its target – can have a direct impact on typical fund terms. At targeted levels of performance, spreads are driven by timing of the carried interest, management fee rates and capital deployment (particularly recycling). When a fund underperforms, preferred returns and catch-ups become important. Though not common among high-return funds, eliminating catch-ups or altering carried interest rates can also have a very significant impact.

This article focuses on changes that can be made within the framework of a typical fund structure. It does not discuss alternatives to traditional structures (such as waterfalls without catch-ups and unconventional management fee bases), nor does it cover the ability of improved terms to enhance the alignment of manager and investor interests. However, each is a critical part of a complete analysis.

A typical high-return private equity real estate fund has a management fee between 1% and 2% as well as a carried interest equal to 20% of the fund’s net profit. The management fee is typically based on investors’ commitments during a fund’s investment period and on invested capital (ie, the cost basis of unrealised investments) for the duration of the fund. The carried interest is generally subordinated to a preferred return ranging from 8% to 10%, which is then unwound by a catch-up ranging from 50% to 80% (resulting in overall profit being shared 80/20, so long as the total profit is sufficient to complete the catch-up layer of the waterfall). Some funds distribute carried interest as investments are realised, while others distribute it only after investors have received a full return of capital and the full preferred return.

The Direct Impact of Terms When Funds Achieve Their Targets

At any given level of gross return, historical gross-to-net spreads among high-return private equity real estate funds have varied considerably. This is true even if we control for the effect of preferred returns and catch-ups on profit sharing by selecting only funds with strong performance.

The difference between an expensive fund and an inexpensive fund rises to 330bps for funds with gross returns in the 28-34% range. 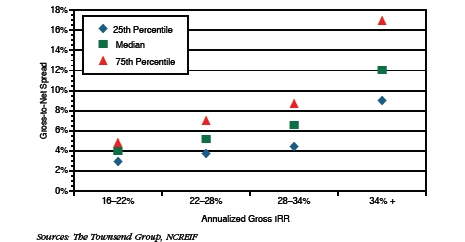 Based on our analysis, the tendency of spreads to increase along with gross returns does explain some of the gaps between expensive and inexpensive funds within each gross return range shown above. However, the majority of the difference is driven by several other factors.

The impact of timing

But the choice of a waterfall type can have a significant impact even in the absence of over-distribution risk. The reason is that the waterfall drives not only the overall split of profit dollars but also the timing of distributions.

In a model with fairly typical assumptions, shifting from an interim-carry waterfall to a fully-pooled waterfall increases net returns by 51bps (assuming gross returns of 20%). This effect is due solely to timing, not to changes in the sharing of profit (though interim-carry waterfalls also can alter profit sharing by increasing the likelihood that the fund will over-distribute carried interest to the manager). Figures 2 and 3 demonstrate this timing effect using two otherwise identical fee structures.

Figure 2: The Effect of Timing 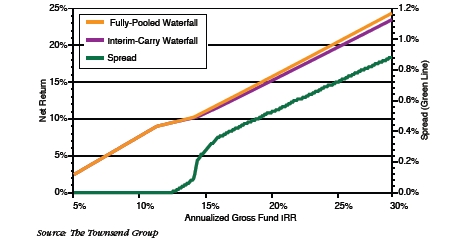 To put this into context, a 20% carried interest combined with a fully-pooled waterfall is, as shown in Figure 4, equivalent to a 17% carried interest that is combined with an interim-carry waterfall. These results are sensitive to timing. The graph assumes a 3.5-year investment period and a 3.5-year holding period for all assets. Longer investment periods and holding periods can amplify the effect significantly. Shorter periods have the opposite effect.

Figure 4: Cost of an Interim-Carry Waterfall 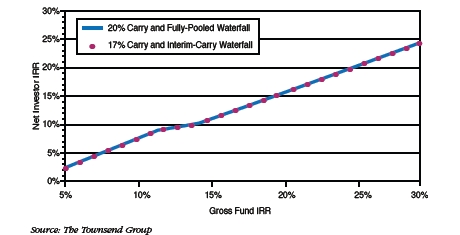 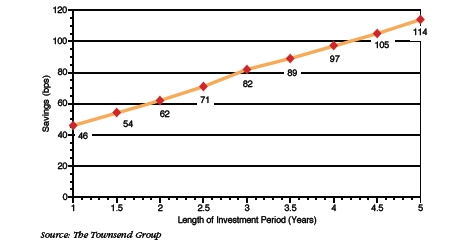 The actual impact exceeds the nominal rate change because fees are paid during the investment period on some capital that has not been deployed (ie, the management fee base exceeds NAV). This effect is mitigated but not entirely offset by the fact that fees are based on invested capital after the end of the investment period (which, assuming that investments are consistently profitable, is lower than NAV).

As transaction volumes slow and investment periods lengthen, differences in management fee rates will have a more pronounced impact than they have had in the recent past (at least with respect to those funds that have fees based on committed capital during the investment period). Fund sizes and a manager’s sourcing abilities also will assume additional significance.

The impact of recycling and capital deployment

Unwritten terms also can have an impact on a fund’s effective management fee rate. A manager’s decision to recycle capital (reinvesting proceeds from realisations or using proceeds to repay subscription line debt rather than making distributions) can increase net returns by effectively expanding the fund’s size without increasing fixed expenses (such as a management fee based on committed capital during a fund’s investment period). Recycling compensates for the fact that a typical private equity fund draws capital gradually and may begin to return capital fairly quickly.

With typical assumptions, shifting from a 100% capital drawdown rate (ie, using 100% of the fund’s committed capital for investments and expenses) to a 100% capital deployment rate (ie, making equity investments that have an aggregate cost equal to the fund’s total commitments, and recycling capital to allow the fund to also pay its expenses) would increase net returns by 24bps. Pushing the capital deployment rate out to 110% (a figure that is not uncommon among high-return private equity real estate funds) would increase the benefit of recycling to 51bps. In this example, the effect occurs without requiring any incremental leverage.

Altering a fund’s capital deployment in other ways can have a profound impact as well. Shortening a fund’s investment period by six months would increase net returns by 17bps. This is accomplished by reducing management fees that are paid on undeployed capital.

Taking all these variables into consideration, it becomes easy to understand the differences in gross-to-net spreads shown by the historical data. Figure 6 summarises the impact of the changes discussed above. 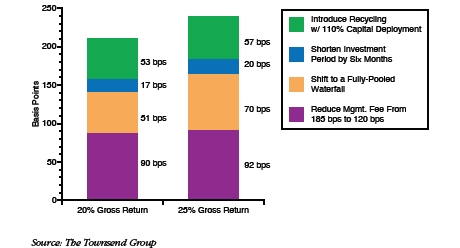 While the results can vary substantially based on a variety of factors (and on the interplay between different factors), these figures are representative of the kinds of spreads that we observe in the market.

The Direct Impact When Funds Underperform

Because catch-ups can allow a fairly small increase in gross returns to significantly alter the sharing of a fund’s profit, the placement of preferred returns and the pace of catch-ups can have a profound effect on funds that underperform.

At lower levels of performance, preferred returns and catch-ups can alter not only the timing of distributions but also the overall sharing of profit between investors and the manager. As shown in Figure 7, at some levels of gross performance, one structure might allow a fund to pass entirely through the catch-up (giving the manager 20% of the net profit), while another may cause the fund to wind up in the catch-up layer of the waterfall or may not allow any carried interest to be paid at all.

Figure 7: The Impact of Preferred Returns and Catch-Ups 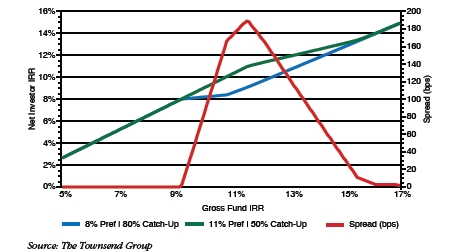 With expanding cap rates and a slowing economy, some existing funds are already projecting underperformance. And many are underperforming on a mark-to-market basis. Figure 8 shows IRRs on a mark-to-market basis (assuming a hypothetical liquidation at current values) as reported in the NCREIF/Townsend Fund Indices. If the reported figures for 2006 are roughly equivalent to the final IRRs in that vintage, many second-quartile funds will fall in the band of performance in which small changes in preferred returns and catch-ups can have the most profound impact. 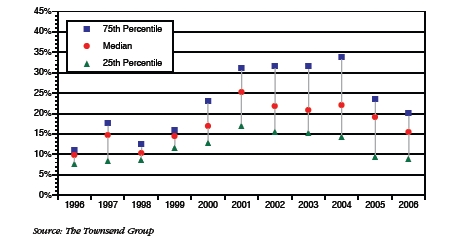 In a period of declining performance, the risk increases that a fund will over-distribute carried interest, particularly in funds with interim-carry waterfalls.

After identifying the right strategy for a portfolio and identifying the managers that are best suited to execute it, the selection of a fund with favourable terms or the negotiation of favourable terms can significantly improve an investor’s net returns. Because the direct impact of terms and conditions can be quantified at the time that an investment decision is made, this exercise can be particularly useful, effectively locking in excess returns from an investment’s inception.

To make the right selections and to negotiate effectively, it is important to focus on the terms that have the greatest impact on net returns, whether or not a fund performs as expected. For funds with a typical structural framework, this means focusing on waterfall timing (interim-carry versus fully-pooled), capital deployment (particularly recycling), management fee rates, preferred returns, catch-ups and clawbacks. It is, of course, also possible to consider deviations from the typical fund structure, such as waterfalls without catch-ups.

Finally, it is important to note that the analysis described above is one element of a complete review of a fund’s terms. Terms also can help drive gross returns higher by aligning interests more closely and can serve as an important signalling device, allowing investors to determine the extent to which a manager really stands behind its projections.

Martin Rosenberg is a principal at The Townsend Group, a real estate investment management and consulting company based in Cleveland. Townsend represents 85 institutional clients with real estate allocations in excess of US$80 billion.