2008 has been an arguably rough year for hedge funds. Over 20%, or US$384 billion, has been shaved off the total value of hedge fund allocations globally, and industry assets have dipped below their December 2006 levels (US$1.54 trillion) for the first time in December 2008 (to US$1.5 trillion). Investment losses accounted for US$185 billion of the decline, while net asset outflows from fund liquidations and investor redemptions made up for the balance of US$198 billion. This is in stark contrast to 2007, when industry assets grew by US$168 billion on account of performance, and another US$175 billion from net inflows. In all, the industry saw positive asset growth from performance in only four of the last 12 months, and net asset inflows in five. Figure 1 below gives a monthly breakdown of industry flows and total assets. 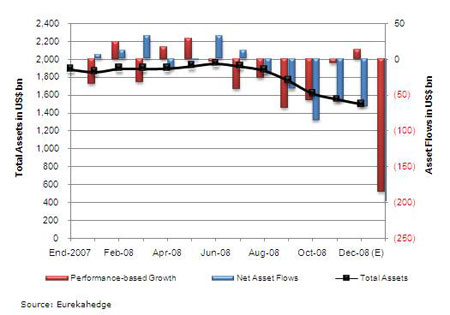 Asset growth among regional hedge fund allocations was largely positive in 2007 and the first half of 2008, but sharply declined in the latter half of 2008, ending the year at or close to pre-2007 levels. Developed market allocations witnessed the bulk of the decline in absolute terms, while emerging market allocations lost the most in relative terms; North American assets were down 17% on average, while Asia ex-Japan and Latin American assets decline by about 24% each. Japan-focused funds were the exception to this trend and have seen a continued decline in assets over the past two years, with the rate of decline slowing down in 2008.

Asset growth across investment styles was more mixed. In terms of performance, the star strategies for 2008 were CTA/managed futures, and to a lesser extent, directional macro, which benefited from clear trends in currency and commodity asset classes across the year. Assets in CTA funds actually grew on account of performance in 2008 (by US$34 billion), while those in macro funds fell by a relatively marginal US$2.2 billion. Redemption pressures were also less detrimental to these two strategies, with outflows in each accounting for about 6% (or US$13 billion) of total industry outflows.

The largest declines in assets was understandably among equity long/short funds (-35%), which accounted for 64% of the losses (US$118 billion) and over 72% of the outflows (US$142 billion) in 2008. The heightened volatility and unpredictable markets in the second half of 2008 also took their toll on arbitrage managers, whose assets fell by an estimated 28% (US$28 billion in losses; US$21 billion in outflows). Distressed debt and fixed income allocations lost about 24% each as liquidity and volumes progressively dried up in the credit and high yield markets in 2008.

On the flip side, event-driven and multi-strategy allocations were the only ones that saw positive asset flows in 2008 (US$8.4 billion and US$11.8 billion respectively). This is indicative of performance expectations in the year ahead, with allocators betting on diversified and opportunistic plays to generate alpha.