Hedge funds continued to attract capital from investors in April with strong performance adding to gains in total assets under management. The Eurekahedge Hedge Fund Index was up 1.58%1 through April – a month marked with strong returns among underlying hedge fund strategies. The MSCI World Index was up 1.84%2 during the month.

Total assets under management crossed US$1.81 trillion as investors continued to allocate capital to hedge funds. Updated April figures indicate that managers attracted a massive US$28.33 billion in April – by far the highest inflow since June 2008. This brings the total net flows for the first four months of 2011 to US$93.94 billion, exceeding the 2010 total of US$66.24 billion. Performance-based gains stood at US$23.97 billion for April as most funds delivered good performance on the back of favourable market conditions. March asset flows were also revised upward with gains to the tune of US$23.85 billion. 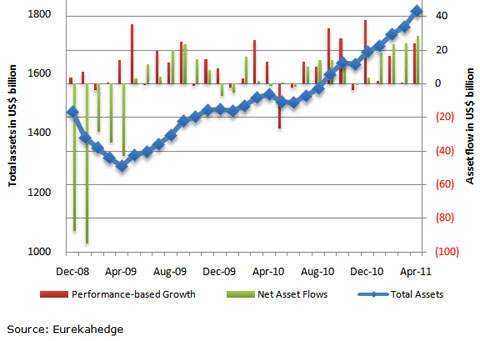 Key highlights for the month of April: